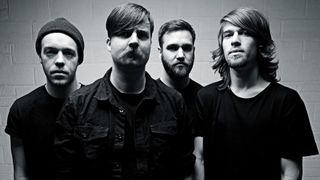 On April 8, Black Peaks are set to release their long-awaited debut, ‘Statues’.

The Brighton progressive hardcore quartet’s full-length effort is a concept album of sorts; its 11 songs are pitched against the backdrop of a crumbling society hastened by bankers’ greed, financial ruin and anarchy. Although frontman Will Gardner tells TeamRock that their story takes place some three decades into the future, it feels as though it could be set in 2016.

1. GLASS BUILT CASTLES (PART III)
“This is the third part of a four-part story that stretches across the album. In a dystopian future, maybe 30 years from now – picture Charlie Brooker’s Black Mirror – there’s another banking crash. The government decide to pay out to keep the system a float once again. As a result of this, many of the major support networks – disability, child protection and healthcare – are cut to cover the fall. A young man named Ivan is horrified by what he sees and is so enraged by where he sees society heading that he takes matters into his own hands. Ivan has been and is already part of the Anonymous network and posts on one of their threads that he will be going to the bank the next day to take back what he thinks is rightfully his. In a sort of epilogue, we see two soldiers sat in a hotel room in Japan – this will tie into a story on the next album – and they’re watching the horrific events that have unfolded in west. A helicopter circles the glass tower of the world bank. From the tower, we see three figures hanging from the top floor of the building. They’re on fire. The two soldiers mutter to themselves how crazy ‘all this shit that’s going on over there’. They turn the channel over to something less offensive and have another drink.”

2. CROOKS (PART I)
“Ivan opens his eyes at the steps of the bank. He is surrounded by another 300 anonymous anarchists wearing masks. In his hands, he carries a baseball bat and a can of gasoline. His intentions are just to frighten the banks and rob the money he feels is owed to society. As he walks up the steps, crowds of people run past in fear.”

3. SAY YOU WILL
“Say You Will is about being stuck in a job that you really hate and how trapped you can feel. The song makes me think of a woman working in an office for years and one day she decides she needs to break free. One afternoon, she runs and jumps through the office window, which is many floors up. As she breaks through the glass, she begins to transform into a half-bird/half-angel creature and slowly glides away towards the setting sun.”

4. HANG ‘EM HIGH (PART II)
“Ivan becomes caught in a terrible stream of violence as the banks are torn apart. Security guards are executed and set on fire. Days go by and the country descends into chaos. Riots break out all over the city as water supplies and electricity are cut during the carnage to try and control people. Police barricade and protect the richest areas of the city where there is still some form of control. Ivan is held responsible by the group of anarchists and is marched to the head of the banks to claim revenge once and for all. The group storm the ‘glass built castle’, tearing apart the offices as they climb their way to the top – the heads of the world bank are hiding in their boardroom. In a last attempt to save their lives, Ivan pleas with the group that this violent uprising is not what he wanted. His pleas are in vain as the bankers are doused in gasoline and hung from their towers in flames to send a message to the rest of the world. This particular image was actually inspired by horrific events in Mexico that took place in 2012.”

5. SET IN STONE
“This song is about the beauty of being alive and having all or any of your senses. It’s a luxury being able to see, hear and smell and we all take it for granted a lot of the time. It’s also about the fear of growing old and losing all that is precious.”

6. SAVIOUR_
“Saviour_ is about frustrating discussions about beliefs and ideas with religious fundamentalists and questioning our own mortality.”

7. STATUES OF SHAME (IV)
“In the wake of Ivan’s path of destruction, the whole world begins to break down. The lack of care or attention paid by people across the world leads to global riots and chaos. A nuclear holocaust wipes out half the population of the globe and scars the earth. This came from a recurring dream that I had where I’m searching for a girl in a barren nuclear wasteland. The search goes on for days along a highway littered with bombed-out cars until I eventually find her.”

8. DRONES
“This song is about revenge. We all meet people that abuse positions of power or feel the need to bully others. When I was younger, I felt so strongly about some of those people that they made me wish an eternity of pain and suffering upon them.”

9. WHITE EYES
“This song is about losing both my grandfathers over the course of writing and recording this album. It got me thinking about getting old in general and how we deal with palliative care and the psychology of losing loved ones. Perhaps it would be easier for us to sometimes let go of these people rather than make them suffer for months or years at a time for our benefit?”

10. FOR THOSE THAT SLEEP A THOUSAND YEARS SHALL SOON WAKE
“This was an instrumental jam that Joe (Gosney, guitar) and I spontaneously came up with in the studio late one night. Joe was trying some ideas out on the harmonium [a pump organ] and I had my saxophone set up with a load of effects and it just sort of happened! I think it sounds a bit like giants calling to each other as they cross a mountain range.”

11. TO TAKE THE FIRST TURN
“The song is about being young and promiscuous and how we have all been led on by somebody that we really wanted to be with. We were lucky enough to get one of our heroes to feature on this track – Jamie Lenman [formerly of Reuben]. Jamie had been to see us play a few times over the last few years and when we wrote this track in the studio, the end section had so much space. We thought about giving him a call and see if he wants to write something for it? We sent it over and he loved it. Without a doubt, this is one of our favourite tracks on the whole album and it gives us goosebumps every time we hear his part.”

Black Peaks debut album Statues will be released on April 8 via Easy Life. The band are currently on tour. For more information, visit their official site.