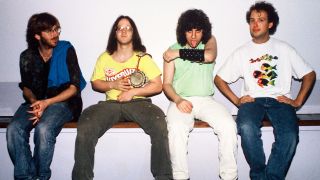 The phenomenal success of Phish is one of the more curious tales in rock. Often ignored or derided by swathes of the US music press, utterly invisible in the UK, the quartet nevertheless boast an army of fans, swapping live recordings and shoring up a vast online community. Phish gross an average of $1.5 million a night and are so big that they host enormous multi-day festivals with only themselves on the bill.

The first of these took place in August 1996, when 70,000 ‘Phans’ flocked to an old air force base in Plattsburgh, New York. Apart from carnival rides, flight displays and circus acts, the audience enjoyed seven sets of Phish music over two nights. Other festivals arrived soon after, pulling in similar numbers.

The peak came at the end of December 1999, when Phish organised Big Cypress on an Indian reservation in Florida. One of their five sets lasted seven-and-a-half hours – catnip to the 85,000 in attendance. It was the largest Millennium Eve gig on the planet, leaving Barbra Streisand, Elton John, the Eagles and Kiss in their dust.

“The festivals grew organically out of our early scene in Vermont,” singer/guitarist Trey Anastasio told Rolling Stone in 2011. “We were always a party band and we used to play outside a lot. People always seemed to show up… We’ve always had a very tight-knit community.”

Formed at the University of Vermont in 1983, Phish are almost impossible to categorise. Early days saw them pepper their sets with Grateful Dead songs, before they began exploring everything from prog to bluegrass, hard rock to calypso, jazz fusion to show tunes. Phish shows could be daffy one minute, deadly the next.

The glue that bonded all these disparate styles together was the band’s fondness for improvised jams. The current line‑up (completed by bassist Mike Gordon, drummer Jon Fishman and keyboard player Page McConnell, all of whom double as vocalists) have been together for 32 years now, give or take a couple of interruptions in the 00s.

Talking to writer Michael Snyder prior to Garcia’s demise, Anastasio suggested that the connection was “an energy thing and a sense of adventure. There’s a similarity with the Dead shows because of the risk in improvisation. They do it. We do it. And you never know what’s going to happen.”

In 2015, this alliance was officially endorsed when Anastasio stood in for Garcia at the Dead’s Fare Thee Well 50th‑anniversary shows.

Apart from the above influence, Anastasio’s formative years saw him absorbing the sounds of Jimi Hendrix, Pat Metheny, King Crimson and Stanley Jordan. For him, ultimately, improvisation is both a liberation and sanctuary.

“Music has always been my protection against the world, from a very young age,” he says. “I feel safe inside of a jam.”

All join together: the forgotten heroes of the jam-band community

The strange lives and far-out times of The Grateful Dead

Lost in a jam: Gov't Mule