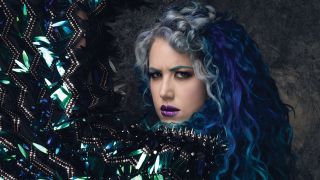 We caught up with Arch Enemy’s vocal cord-shredding frontwoman Alissa White-Gluz and it turns out she has a few things to say about the lessons she’s learned in her career so far. Plus, we get the score on her impending (and long-long-awaited) solo album, Alissa. Over to you, Alissa...

Fame comes at a price

“I feel like I never complete life lessons – I’m just learning them, getting my degree in them, then getting my doctorate in them, so I learn more as I go. The most difficult thing to learn is how to deal with having people know my name and my face when I don’t know them.

"I obviously keep a lot of stuff private, so people really only know 1% of what there is to know about me, but because of the day and age we live in, people think they know a lot more about musicians they follow. It’s a strange thing for me to think about. I’m just not built that way.”

“It’s been the biggest learning experience of my life because I went from zero to 100 putting together [this solo] album. In order to do Alissa the way I wanted to, I had to clear out a room, build a studio and a vocal isolation box, buy all the studio equipment and software, teach myself how to self-engineer, teach myself how to play guitar, how to program drums and how to do a piano accompaniment.

"Since mid-2016, I’ve been slowly working from the ground up to make it happen because I’m always on tour with Arch Enemy, and I need to engineer it and produce it myself. Getting all that done when you’re on tour 80% of the year takes some time but so far, I really like everything I’ve written and the direction it’s going.

"I’m happy with the collaborations so far. They say you have to step out of your comfort zone and conquer your fears in order to grow as a person, and this has been 100% that already.”

“I see myself as separate from my body sometimes and I think, ‘Man, my body must be thinking I’m in a fight every night!’ I get onstage and my heart rate goes way up, I’m screaming for 90 minutes straight and doing all sorts of athletic moves. My body must think I’m in a war zone, which explains why I’m so tired every night. I personally love having a huge stage because I want to be able to run around. I want stairs and risers and pyro! If I could, I’d be swinging off the ceiling!”

“One of the biggest aspects of stage production is where you are and where you’re heading. We just finished a tour where we were flying every day for the last two weeks, so you can’t bring 17 pyro cannons with you on flights. We’ve gone from Russia to Finland, Denmark to Ukraine and all over the place but we still make it work.

"When it comes to putting on a huge production, the ideal route is being on a tour bus and you play a couple of shows in a row but you have plenty of days off so the truck that’s lugging all the stage gear can get there and set up, then do run-throughs to make sure everything is working properly.

"That’s not always the case, even for Arch Enemy; the most important thing to us right now is getting to as many places and playing as many shows as possible. If it comes down us not having our full production but we can still get there with time, we’ll still go.”

Never forget where you came from

“My proudest moment was the first time I played in Montreal with Arch Enemy, where I grew up and started playing music, so my whole family was there that night. Last week, I turned 34, which officially marks the point where I’ve played music for more than half of my life now… that makes me feel old!”

“We’re all really clean and because there’s sometimes 15 of us in the same bus, everybody is respectful of each other, which takes a while to learn. The first bus I was on many years ago wasn’t like that; there were 27 of us in one bus, every band on the package shared one.

"There were a lot of younger people so there wasn’t that unwritten rule book to respect people’s privacy and keep your stuff organised, or to try to be quiet in case somebody’s sleeping.”

Make your team a family

“It’s a really good environment on tour with Arch Enemy: we all hang out and get along well. It’s not like we just hired some guy to do sound or lights, we roll like a family. I go hiking with my guitar tech, canoeing with my front-of-house engineer, bike riding with my monitor guy whenever we can.

"We discuss things every day on how we can improve our show, I talk to our lighting guy about what colours he’s feeling for each song, I say I’m thinking of making a jacket in a certain colour and ask how it would look on stage with this light setup. We really go into detail and I love every aspect of it.”

The internet changed everything

“I began my career before social media. I’m the last generation that grew up without the internet and cell phones. I was a teenager when I got a cell phone and the internet existed but it wasn’t commonplace and it wasn’t something everybody used. I grew up while all these major shifts were occurring for everybody and their lifestyles, especially in the music business, so I’m part of a weird, ever-adapting scene.”

“When I see bands live, my friends’ bands or not, I watch them play and I’m always picking up on things like lighting cues or the way their drumkit is arranged, even the way their mics are set up. I can’t help but analyse what I’m watching. I try and just enjoy it, and I do, but for a lot of it I see all the little details because I’m in that world and they stand out to me.”

Be a good guest

“I’ve been doing a lot of guest vocals since I started because I was one of the only girls in metal, especially in my local scene, so local bands asked me to do ‘the girl parts’ on their work. I never charge for guest spots, or demand anything weird. I always just say, ‘Send me the track and if I’m feeling it, we’ll make it awesome.’

"It’s only happened once or twice where I turned it down because I wasn’t feeling it, but for the most part, the person or band who wrote the song writes to me with their vision and I can really see it, it feels honest and authentic.

"Stepping out of my comfort zone and trying something totally different excites me; working with people I don’t normally work with is a great way to learn and grow as an artist because it’s like going to a new school where you suddenly have all these new classes and you want to do your best.”

“I really appreciate the visual aspect to a show. Our lighting guy is brilliant, he’s worked with a lot of artists and knows how to put together a stage and make it seem like this whole world, an experience. I did a bit of lighting in my early 20s for theatre, so I really appreciate making a show not just a presentation of songs but a whole audio-visual experience.”

“Writing with Arch Enemy, I want to hear the song first, so Michael and Daniel [Erlandsson, drums] write the songs, then I can place the lyrics in the right points. Usually when I hear the music, it conjures up moods, feelings and images. For example, when I first heard First Day In Hell, all I could think of was the colour red, which isn’t a far stretch because you think of fire and the colour red in hell.

"Then I ended up writing the lyrics with that in my head and it ended up with this gloomy, dark, desperate feeling, even in the way I sing it. We discuss all this with the band and the crew, so First Day In Hell is played live with red lights onstage to keep that theme going. It’s cool to take a song from its infancy and build it all together to present it live to fans all around the world. First Day In Hell is currently my favourite song to play live!”

“One thing I’ve mastered over the years, also because it’s part of my character already, is not being super-interested in the fame side of things. I feel the same playing a huge festival as I did when I played my first show to three people in a bar in Montreal. I just wanted to sound good, look good and for these people to be our fans and go tell their friends so we have more fans next time.

"I never hit the stage thinking, ‘We’ll definitely deliver.’ I go onstage ready to fight and hope people are satisfied and moved by our performance. I wish I had the confidence to think we’re going to own it every night. I just want to make sure we’re presenting our music in the best way possible.”