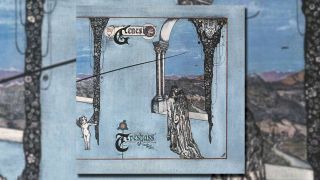 Back in 2011 Prog Magazine put Genesis on the cover for the very first time. In a cover feature that spoke to Phil Collins, Tony Banks, Mike Rutherford, Ray Wilson and Anthony Phillips about various eras of the band's career, we collared original Genesis guitarist Phillips to recall his time in the band.

Since leaving Genesis in 1970, Anthony Phillips has gone on to develop a career in writing both library music, TV scores and since 1977, a string of solo albums, the most recent of which is Pathways & Promenades. However he’s still best remembered as one of the founding members of Genesis. Phillips recalls how in their earliest gigs audiences didn’t know what to make of the group.

“We were playing at technical colleges, at night clubs and we bemused people. The most trouble we had was with the quiet songs because we just didn’t have the amplification and people just wouldn’t listen. One of the sad things about that year on the road was that a lot of material was dropped. We used to kick off sets with Grandma and Little Leaf [which later appeared as Old Wives Tales on Private Parts & Pieces III]. These might’ve have made it onto Trespass but were torpedoed off the road as they were too quiet.”

After a year of continuous touring, Phillips, suffering from a bout of glandular fever and an extreme form of stage fright, quit the group. Did he ever regret his decision? “Of course, but I wouldn’t have wanted to go touring or have the press intrusion. It would’ve scared the living daylights out of me.”

Is it ever irksome being associated with something that you did over 40 years ago? “You do get the 'Pete Best' routine from people. It is difficult in that respect because you can never really get away from people who are much more interested in the fact that you were in Genesis than anything else. You learn very quickly to be polite and quite quickly take your leave in those circumstances. The good side is that nobody can ever take away that I was one of the founding fathers; there was an input, a certain side from Mike Rutherford and I which is in the foundations. That’s the good side, and the reflected glory that comes with all of that.”

Would Phillips ever be tempted back for a grand reunion gig? “The answer most definitely would be ‘No!’ I haven’t toured since 1970 so I would feel completely out of my depth. if such a gig was for a charity. Then I would have to say ‘yes.’ I don’t know how to say this without sounding too humble but I feel a bit small. These guys have been gigging all over the world. I’m just a studio musician now, really.”