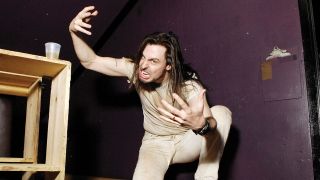 It’s October 2001. One month has passed since the 9/11 terror attacks on New York. Grief and fury mix like a Molotov cocktail on the streets of America. George W Bush’s war machine rolls into Afghanistan to extract Osama Bin Laden, while back home, popular culture is defanged to soothe a raw nation, with a list of nearly 160 ‘lyrically inappropriate songs’ allegedly delivered to US radio stations. The West will spend the  next decade looking over its shoulder. The party is over.

Andrew W.K. just wasn’t made for those times. His breakthrough single, Party Hard, was ostensibly everything that post-9/11 society could not tolerate, particularly if viewed in tandem with its music video.

Dressed in grubby whites like some anti-Messiah, the singer inspects deep facial cuts in the mirror of a sinister, strip-lit bathroom. A robot voice gabbles: ‘When-it’s-time-to-party- we-will-party-hard’. Then begins an adrenalin shot of pop-metal whose chant of ‘Let’s get a party going!’ seemed deeply out of place amid the debris  and body bags.

The consensus was split: W.K. was either a beer-chugging rock pig in the Mötley Crüe tradition, or an irony-monger deconstructing the clichés  of the rock lifestyle. In fact, he was neither, revealing himself in the press as Andrew Wilkes-Krier, a soft-spoken former piano prodigy from Michigan. Similarly, while most listeners inferred that Party Hard was about alcohol, it’s never mentioned in the lyrics.

“In 1998, I had just moved from Michigan to New York,” Andrew  recalls. “I had never been drunk,  I didn’t do any drugs and I didn’t have any friends. I didn’t know anybody;  I just didn’t have that network I’d had back in Michigan. I spent a huge amount of time at home alone, which was pretty much what I did all my life.

"I never was a very social person. I had always felt awkward at parties; social interaction was tricky for me. But  I loved the atmosphere of being at  a party, the way it felt in the air, so creating music that encouraged partying was a no-brainer.

“I didn’t want anyone to feel they had to act a certain way to ‘party’,”  he says of Party Hard’s lyrics. “I’d had many life experiences that told me something about me was wrong, or I couldn’t be part of this club, all that crap.

"I hated being at a party and someone coming up and saying,  ‘Why aren’t you drinking, why aren’t you dancing?’ That’s complete BS. So I thought, ‘I’m gonna make a song telling people to party, but party however they want.’ I never dictated what people should specifically do.”

That sentiment was writ large in the pre-chorus payoff (‘Do what we like and we like what we do’). Andrew nods: “To me, there’s an element of celebration in the song, which comes from doing what appeals to you. So much of the time, I’ve felt like I had limitations on what I could do, or circumstances prevented me from doing what I really wanted in life.

The lyrics of Party Hard were settled, but Andrew had his moment of musical clarity in the pit at an alt-rock show. “I have a very clear memory. The first concert I ever went to in New York, it was at Irving Plaza or the Bowery Ballroom, and the headlining band was Sonic Youth.

"And even though the music was nothing like what I’d end up making, the crowd was going insane, and I had this feeling of, ‘OK, if I had  a chance to be on that stage, what sound would make people go insane?’ Party Hard was one of the first songs  I wrote after that.

"The goal of the song was a physical reaction. I’ve had experiences where music doesn’t just change the thoughts in my head, it changes the way my body feels. With Party Hard, I wanted to push that as  far as I possibly could… to change your whole state of being.”

Andrew himself needed escapism more than most. “I was working at the time at a very fancy department store in New York,” he remembers. “There were many things about the job that  I hated very deeply, and to deal with those, I would tune out, go to a different place in my head.

"I would write songs while I was working – whistle while you work, literally. I wanted Party Hard to start with a riff that was one note. I had a vision of being onstage and the sound is just ‘duh! duh! duh!’ No chord changes, everyone playing just one note with as much intensity as they could. I wanted it to be this heartbeat.

“There was no question as to whether I would include piano,” he continues. “Before I heard any records, I was playing piano, learning scales. The good thing with this music is that piano does have the ability to have a lot of energy; we’ve heard it used in rock music since the beginning.

"The first rock’n’roll music ever played was played on piano. Electric guitars didn’t even exist. It’s a real rock’n’roll instrument, it’s percussive, it has power. And it’s all I could play.”

That didn’t stop Andrew recording every instrument on an initial demo of Party Hard: a “skeleton” he says remains on the final version, albeit beneath the parts played later by session musicians. “I didn’t think of it as a classic,” he says, “but I was clear this was going to be ‘my song’ and should be the first single. That this should be the song that people should associate with me.

"I had a strong feeling it would make other people go crazy and run around the room. It’s got a giddy kind of energy, like it’s the last day of school, or you’re about to go down a rollercoaster. That feeling of breaking through all the bullshit and confusion that tells us that it’s not amazing to be alive.”

But that was before 9/11. After the Twin Towers fell, voices higher up the record company food chain questioned whether it was appropriate to encourage America to ‘get the party going’. “There was a big debate,” says Andrew, “because they thought putting that song out would be suicide and  I would never recover. In the early days there was a lot of debate over how safe we should play it.

"I would get coached on what I should say in interviews. They’d say, ‘Don’t talk too much about having fun or enjoying your life, because there’s a lot of people out there who are miserable and they’re not gonna appreciate you saying that.’”

But Andrew saw it another way:  “At that moment, celebrating what you had was never more important. To be grateful for the life we have and this incredible city… it’s all just hanging by a thread. Is singing about having fun just a big waste of time, and a disgrace?

"Or is putting people in touch with the parts within them that make them feel good in fact a very worthwhile pursuit? The feelings of joy and power that  come from music – that’s what allows humanity to rise up and be at its best.  If everybody was singing songs on 9/11 instead of flying planes into buildings, it wouldn’t have happened.”

Party Hard got its release, and Andrew’s instincts were vindicated  by the response, with the song storming the US and UK charts and thrusting its author onto an NME  cover with the (admittedly hyperbolic) headline: ‘The Saviour Of Rock’. Eighteen years later – a period in which the song has notched up 17 million-plus Spotify plays – the singer is neither jaded by its ubiquity nor tired  of chalking it onto the setlist:

“Drop it? Oh God, no. I love it more every day. It’s given me so much, brought me so many opportunities and happiness, and I hope into the lives of other people. I bow down to this song. I don’t feel like it’s mine, it’s just a song I got  to play. I could never imagine a day not playing it. I’ll die playing that song – and that would be a great privilege.”

Andrew W.K. - You're Not Alone
The hard partying rock icon takes a delirium-inducing detour in his latest album, out now via Sony.View Deal