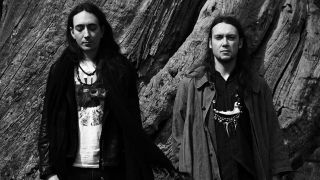 This month sees Alcest return with their new album Kodama, a much darker, angrier affair than the harmonious delicacy of 2014’s Shelter. A return to the liminal, dreamlike worlds so effectively evoked by Neige and his drumming partner Winterhalter, Kodama, meaning ‘tree spirit’ in Japanese, takes inspiration from elements of Japanese culture, particularly the captivating Studio Ghibli film Princess Mononoke, a fable that relates the suffering inflicted upon the natural world by mankind’s relentless thirst for progress. Also inspired in part by recent real world tragedies, this is a darker, angrier record, a return to the Alcest of old. Here Neige takes us through a track-by-track guide to one of the best albums of 2016.

This was not the first song I wrote, but it’s really the song that triggered the whole personality of the record. I think it might be my favourite song. It’s a mix of so many different elements; it has this very grungy, Smashing Pumpkins sound, it’s also very cinematic, and I really wanted to evoke this Asian feel. Sometimes you find a riff, and it triggers an idea. The song is complex; it has many different parts, it’s quite progressive. I wanted to make a completely alien song, something that doesn’t sound like anything else.

This one I think is quite an uplifting song. It reminds me of our first album. It’s green and fresh and has some influence from The Cure in the clean parts. It has a nice chorus melody, there’s a bit of Explosions In The Sky in there. This song is also quite progressive and complex with many riffs and it also has this more like poppy, Asian feel in some passages… no, not like K-pop! [Laughs].

The title means “I am from somewhere else”, or “the Outsider”, and it’s about this feeling of not belonging to this place, you know, to this Earth. The song is quite epic; it has a nice drive, this constant tempo and a few black metal passages, and some shoegaze elements in the clean vocals too.

This was the first track I wrote for the album. You can feel that I was still in the Shelter mindset; it’s shorter and has a verse-chorus-verse structure. I had in my mind the image of a tribe of children in the forest, kids dressed almost like animals – very Princess Mononoke-type – something very tribal, very wild but very pure at the same time. I think it’s a weird song, a bit alien. It has some noisy elements, lots of reverse guitars and a very martial rhythm. I think the record in general is full of contrasts. You have some very aggressive moments and really dreamy parts.

It means bird of prey. It’s a metaphoric text about nature taking revenge on the human world. I think it’s probably the most diverse song on the record and that’s why it’s the first song we released. It has elements of all the other songs. In the beginning I was not sure about it, because I thought it was too metal, so I put it to the side for a while, but I knew that my drummer Winterhalter really loved the song. We discovered black metal more or less at the same time, but he stuck to it a bit more. He’s more of a metalhead than me!

I wanted to keep up the tradition we had on the two first records, to have five ‘real’ songs, you know, with traditional instruments, and in the end a more experimental, stand-out track. This track was actually a studio accident! It’s the first riff of Je Suis D’ailleurs. The studio guy recorded it on tape and reversed and slowed it down. It makes this very volcanic, earthly sound. We worked quite a lot on it, it’s not just the riff reversed, it has layers. He did it just for fun to see how it sounded and we were like “Wow! That sounds really strange and interesting.”

Metal Hammer Quiz: Match the singer to the band