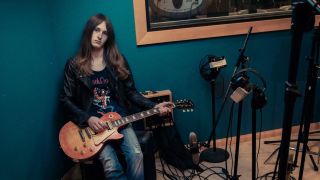 Aaron Keylock is beginning to build a serious reputation. A teenage blues prodigy with nationwide tours with Blackberry Smoke and Cadillac Three under his belt, he’s also played the Download and Ramblin’ Man festivals, and the release of last month’s Cut Against the Grain album had critics salivating into their laptops.

It might be daunting being compared to Gary Moore when you’re not legally old enough to drink, but Aaron seems to be taking it all in his stride. And now he’s released an acoustic session version of the album closer No Matter The Cost, which strips away the electrics of the original recording whilst retaining its Stonesey swagger.

What’s No Matter What The Cost about?

No Matter What The Cost is a song that was inspired by Gregg Allman. Lyrically I guess it’s very headstrong and just about not letting anything knock you down. I’m saying be honest and true to who you are and you’ll get where you want to be. Bob Dylan said “you’re successful if you wake up in the morning and love what you do”, and that’s pretty much what the songs is about for me: just having belief in what you do and who you are.

Which guitarists inspire you?

The guitarists that have had the biggest effect on me are guitarists that have their own sound and style. Everyone from Neil Young to Keith Richards, Chet Atkins and Nick Drake to Johnny Winter and Peter Green. I play music for freedom and expression, and you can hear who I am, and what’s what moved me from a young age, in my music.

What did you learn touring with Blackberry Smoke, The Answer and Wilko Johnson?

You learn loads of things from bands who have been playing for as long as they all have but I think the main thing was the respect for the crew and other bands around you.

What does Fabrizio Grossi bring to a recording session?

Working with Fab was cool for me in the fact we were definitely making a record for me and no one else. There wasn’t anyone in the studio telling us what to do or how to sound, I wasn’t thinking of anything other than “do I like the record and will I listen to it at home?” Fab had great ideas and brought great musicians to the record. Some of the songs we didn’t change anything on from the demos I first had and others came out as completely new songs, but overall he helped me as a songwriter and brought my vision of the songs to life.

What can fans expect from your upcoming shows?

We’re changing the set list every show and jamming a lot too, I love experimenting with rhythms. Coming from blues, dynamics are a huge thing and improvisation is a huge thing for me, but we play rock’n’roll music. We’re not a blues band, so there’s a lot of different things going on and every show is different.

Are there any other young blues guitarists you can recommend to us?

There’s a lot of great music out there at the minute. We finished last year off with a tour with SIMO and JD has incredible soul. I’ve jammed a few times with Jared James Nichols now and he’s great, Tyler Bryant is really cool. I love bands like Alabama Shakes and Gary Clark Jr. I jam all the time with a great player and songwriter called Sam Hare. There’s some great stuff out there!

What do you listen to to relax?

Whatever I’m really into at that time I guess. Recently I’ve been really getting into Little Feat. Lowell George was an incredible songwriter and musician. I also listen to Leon Russell a lot to relax.

Aaron supports Sari Schoor at London’s Borderline on March 20, and headlines the Black Heart in Camden on April 4, before heading to the HRH Blues Festival in Sheffield on April 16. Cut Against The Grain is out now.