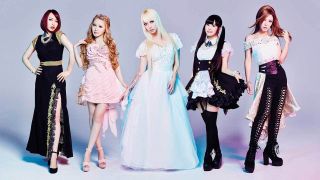 If people say the words “metal” and “Japan” to you, there’s a strong chance you’ll instantly think of Babymetal. The arena-conquering trio (plus Kami Band) have been at the top of the J-metal pile for years, but they’re not alone. In the new issue of Metal Hammer, we sit down with Lovebites, the all-girl power metallers who are turning the scene on its head.

But who else is about to break out of Japan and into the wider metal world? Here are five bands you should check out immediately.

Often credited with launching this unexpected scene, Aldious’s 2010 debut album, Deep Exceed, was the top-selling independent album in Japan on release, reaching #15 on the Oricon charts. Don’t let the Disney-style ballads put you off; when they get heavy, they produce power metal full of grandeur.

Another band that formed from the remnants of other groups – in this case, Gacharic Spin and Light Bringer – Doll$Boxx play a giddy blend of pop, metal riffs and electronica. Shout Down is a perfect example, with bursts of death metal growls, a hugely catchy chorus hook and gleefully over-the-top guitar workouts.

Impossible to miss in their signature uniforms (a reference to Japan’s maid cafés where girls in costumes serve and entertain guests), Band-Maid have played The Underworld and performed at MCM London Comic Con. Their sound isn’t too far from Halestorm and their new album, World Domination, has just been released.

Musically, exist†trace draw upon alternative and gothic metal, although their earliest records leaned towards death metal, with vocalist Jyou switching between clean singing and growling. Their androgynous image shows their roots in the visual kei movement and their inclusion on the Silent Hill soundtrack introduced them to international audiences.

Recommended by Lovebites’ Mi-ya, Mary’s Blood have opened up for Dragonforce and Marty Friedman, so they surely know a thing or three about shredding. Their most recent album, FATE, is a charging belter of a record, packed with riffage. “They’re more like a Japanese metal sound, but they’re good,” says Mi-ya.

In the new issue of Metal Hammer, we chat toLovebites about the rising phenomenon of all-female bands playing fast, hard and heavy metal in Japan. Buy it directly here or become a TeamRock+ member to read it right now.