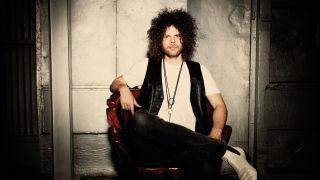 The group hailed as the Last Great Rock Band after their self-titled 2005 debut has had a rather bumpy ride since.

But Wolfmother will return in 2016 with a brand new studio album, Victorious (produced by Brendan O’Brien). Work began last January at major domo Andrew Stockdale’s studio in New South Wales, writing and demo-ing everything himself and playing all of the instruments as he did for the band’s debut album 10 years before, but with superstar skin-beaters Josh Freese and Joey Waronker sharing the drumming. The album title came about from the song of the same name. “I wrote it for

a friend who had an illness and it didn’t look good,” Stockdale tells us. “But then things picked up and she got better and it made me think that the simple kinds of things in life like health, and being healed, were the real victories.” It may refer at least in part to his state of mind too. “It’s good to still be playing and to be making music,” he admits. “I don’t take it for granted. I think it’s an honour and a privilege to be able to live off my creativity.”