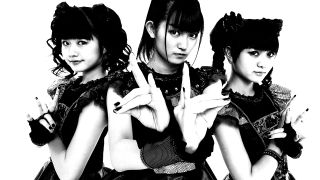 Terrifyingly, no. In fact there’s a lot more strangeness where they came from.

The schtick: Chirpy ‘kawaii (cute) metal’ delivered by cross-dressing Australian wrestler LadyBeard – who claims he is a five-year-old girl – and two teenage girls from Tokyo.

**Weirdness factor: **A cross-dressing Australian wrestler who claims he’s a five-year-old girl? Oh no, nothing weird about that.

The schtick: Apparently these nu metallers were created in “the farthest away land of Ladyland”, and frozen in glacial caskets at the South Pole until global warming thawed them out in 2010. Right…

Weirdness factor: Low, although the opening 30 seconds of their Take My Chance video suggests they’re aware that their fan-base consists largely of middle-aged men with a deficit of social skills.

**Who: **Fear, And Loathing In Las Vegas

Weirdness factor: For anyone under 25 there’s nothing weird at all here: half the bands on alt.rock roadshow the Warped Tour sound like this. For everyone else it sounds like a migraine and aneurysm all at once.