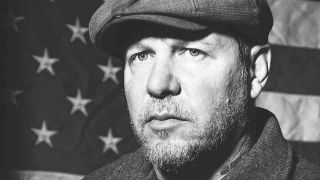 As singer with New York hardcore icons Agnostic Front, Roger Miret has been there, done it and had the T-shirt ripped off his back in the middle of a sweaty mosh-pit. This living legend looks back on nearly 40 years on the frontlines, his time in prison and how having a pacemaker fitted has forced him to calm down just a little.

“The 23 hours that you aren’t onstage. It’s a tough thing to get used to when you’re on tour, you sit around waiting to go on stage and hyping yourself up, you get on and give everything and you come off and you’re ready to go and do something and everyone is ready for bed. It’s difficult.”

“Honestly, I don’t think I’ve ever been given advice. When I was a kid we were left to make our own mistakes!”

“I actually remember the first time someone asked for my autograph, that was weird. I actually said no at first.”

“I was like, ‘Why the hell do you want me to sign something? I’m no one special.’ But then seeing his reaction when I said that made me sign it. It obviously meant a lot to him, and it did make me realise that we were doing something people really connected with.”

“Let me say as someone who has had serious problems with drugs, after decades of being clean I now look back on that time when I was doing that stuff as one big, long bad experience.”

“When I watched our movie, The Godfathers Of Hardcore. I was really touched by that film, I watched it with my family and they were all crying too. I think Ian [McFarland, director] did a fantastic job. He invited me to see a version of it before it was signed off and by the end we were all in tears. My eldest daughter stood up and was blown away. She told Ian, ‘Thank you so much for making this film about my family. And doing this for who we are.’ We were all really touched.”

Are you glad to see hardcore finally treated with a level of respect after all these years?

“Absolutely. You see all those punk documentaries and they usually go from the early days in New York with The Ramones to the UK with The Sex Pistols and then there is this huge jump to Nirvana! And I’m like, ‘That’s not what happened!’ So I’m glad to see that our generation is starting to get a little respect that it hasn’t had before. It does feel like vindication for all of us after all the years we’ve put into hardcore.”

Have you ever met anyone with more energy than AF guitarist Vinnie Stigma?

“Oh, you have to understand that he sleeps a lot! There is a lot of rest needed for that top to keep spinning. He just lives life to the fullest; as soon as he’s awake you know that he’s going to dominate everything. But he’s such a funny guy, the stuff he does cracks all of us up on a daily basis. I love the guy.”

You were jailed in the late 1980s. What was the biggest lesson that prison taught you?

“It taught me a lot. My biggest lesson was that it helped me identify that I was just living for me. I didn’t realise how much I was hurting others, my family. My biggest lesson was how to get out of that, stop being so self-centred. Up to that point it was all about me. I found a way to look at bigger pictures and different ways, not all ‘Me, me, me’. I really didn’t give a shit about anything else. That hardship taught me a lot. And I learnt that I didn’t wanna go back in. There’s two ways out of that situation, and I took the route of never wanting to be there or put my family through that again.”

You had a pacemaker fitted a few years ago because of an underlying heart condition. Would you say your health problems have changed the way you approach a live show now?

“I’m not going to lie and say that it hasn’t. Of course, I am scared sometimes, I’m tentative sometimes. But, touch wood, I’ve never had anything happen too bad yet. I did have an incident at one show where I had to sit down straight after the show, and I was told that I was on the verge of something quite serious from my pacemaker. But I carry on. It’s what we do.”