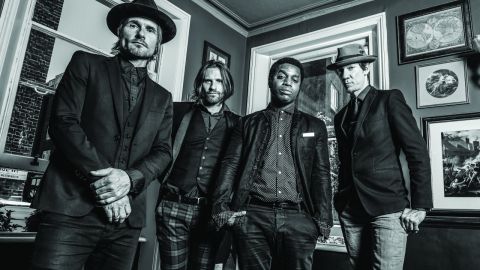 Vintage Trouble have forged a fearsome reputation since their 2011 debut The Bomb Shelter Sessions, with a retro style and an unwavering dedication to incendiary live shows.

Four years on, and with support slots for The Rolling Stones, The Who and AC/DC under their belt, the Hollywood-based soul-rockers return with their second full-length release.

Recorded with über-producer Don Was behind the studio desk, it’s an album that rocks, croons and cries across its punchy 12 tracks.

The slide and stomp of opener Run Like The River shows the band have lost none of their grit and gusto, though the production has smoothed out their sound.

From My Arms and Doin’ What You Were Doin’ revel in the sweet soul stylings of decades past, vocalist Ty Taylor channelling Otis Redding. As an ode to their beloved hometown, Angel City, California has a Stonesy swagger, cueing up the lovesick plead of Another Man’s Words and the laconic blues of Before The Tear Drops.

While guitarist Nalle Colt and the rhythm section of Rick Barrio Dill and Richard Danielson are steadfastly deft and dynamic throughout, there is the undeniable feeling – on this album at least – that it’s Taylor’s show. If You Loved Me is a deeply soulful cut, the singer wrenching its refrain and turning up the Otis to 11, while the gospel influences of Soul Serenity play out a record that is brash, slick and intimate by turns. Just don’t forget to catch ’em live, too.