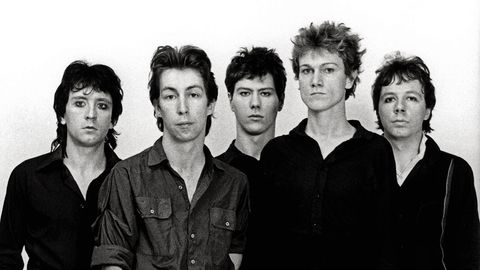 The exclamation mark is crucial. Originally a nod to Neu!, it served to represent the shock of the new. Every aspect of the original Ultravox! was exclamatory and everything changed when they dropped it. Formed in 1974 by Royal College of Art student Dennis Leigh, Ultravox!’s rapid metamorphosis into one of the punk era’s most progressive and influential combos came courtesy of the healthy competition between Leigh (soon to be rechristened John Foxx) and Eddie Maelov of the eternally overlooked Gloria Mundi.

Having met through a Melody Maker ad, the pair presupposed concepts combining sci-fi, psychedelics, Iggy, Bowie, Dolls, Velvets, Cage, Tangerine Dream, Kraftwerk, Warhol, Burroughs and Ballard. Then, just as punk was about to lurch over the horizon, Maelov bought a Korg ARP (the first of a new breed of versatile, affordable synths) and Foxx, clearly espying the future, acquired an ARP and drum machine of his own.

Ultravox! signed to Island Records, yet another excuse for a contemporary rock media in thrall to The Clash to deride them as a ‘punk Roxy Music’ (incredibly, not meant as a compliment). The press may have thrown fish, but Ultravox! hit the road and casually wowed the shires. A raucous stand-alone single, Young Savage (found here on a fourth disc of essential non-album extras) perfectly captured the time into which it exploded.

Their eponymous debut album, delicately produced by Steve Lillywhite and Berlin-era Eno, flew in the face of prevailing identipunk mediocrity with an enormous breadth of vision, literate dystopian lyrics, dramatic dynamism and grand ambitions deliciously reminiscent of glam. Intensified second set Ha! Ha! Ha! followed with almost obscene haste, though not before yet another classic seven-inch orphan, RockWrok. And were they selling? No, they were not.

So Island blinked, Foxx bailed and Ultravox! lost their exclamation mark, gained a Midge, a moustache and a multimillion-selling Vienna no one in their right mind need ever hear again. Ultravox! then: way ahead of their time, synth pioneers that also happened to be an astonishing guitar band, but couldn’t get arrested. And no, there is no justice.