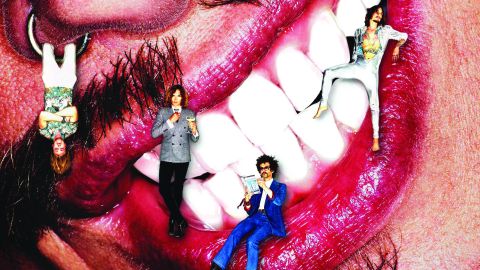 Having recently toured with Guns N’ Roses, the band’s classic rock credentials are stronger than ever, especially as Pinewood Smile was recorded with new drummer Rufus Tiger Taylor, son of Roger, and producer Adrian Bushy, a double Grammy-winner for his work with Foo Fighters and Muse. And yet the songcraft feels a little bumpy, closer to the underwhelming mixed bag of their 2012 comeback Hot Cakes than to the glorious operatic bombast of its 2015 sequel Last of Our Kind.

Marrying Mötley Crüe-level innuendo with sardonic comment on fickle pop fame, All The Pretty Girls is weapons-grade party-metal pastiche: ‘Plenty of action, massive attraction, when you’re selling out stadiums,’ quips Justin Hawkins, the Russell Brand of rock. But many of the best songs here are the least typical, particularly those that combine lowbrow wit with an edge of anger Solid Gold is a case in point, it’s AC/DC sized hip-thrusting riff married to a scalding confessional lyric about the cocaine-fuelled cynicism of the music business. “We’re never softwareuiphraseguid=“1fcd0294-7cef-4f17-a91c-f5661e375100”>gonna stop… shitting out solid gold!” Hawkins shrieks in full ear-bursting castrato.

Another left-field killer track is Southern Trains, a rare detour into snarly punkmetal with a lyric that lambasts the widely-loathed, strife-torn rail franchise that links London to the English south coast. ‘It’s a journey into pure despair/There are fucking softwareuiphraseguid=“c9842f9b-9803-4099-8782-caa2b086f656”>arseholes everywhere!’ Hawkins trills winningly. A handful of straight-faced power ballads also stand out. Why Don’t The Beautiful Cry is a classy windswept weepie while Lay Me Down, Barbara must surely be the most Morrissey-esque title Hawkins has ever crooned, a seduction song that subverts but also celebrates naff romantic clichés.

Alas, quality levels dip markedly in the album’s latter stages, where anodyne filler meets random scatological humour. The closing number Stampede of Love is a fingerpicking, country-rock heart-twanger based around a series of jokes mocking a fat friend: ‘I saw you at the beach today/You looked quite SOFTWAREmark” gingersoftwareuiphraseguid=“7d4cac48-cd67-46d4-b9ec-bfb84bc8a8e8” id=“e47443fe-cce4-4ad2-a8ff-3a3f06c34af5”>thin but you were just far away.’ This is feeble stuff, more Benny Hill than Russell Brand. When they hit the target, The Darkness are untouchable, but too much of Pinewood Smile feels like a half-hearted wank when it should have been a mighty ear-shafting.