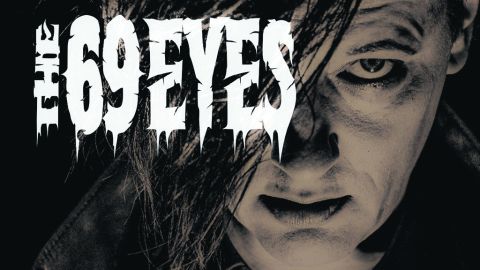 Finnish goth‘n’rollers The 69 Eyes are back after a nearly four-year-long break.

Within moments, Universal Monsters’ opening track Dolce Vita sees singer Jyrki 69 affecting the Peter-Steele-meets-Elvis persona he’s known for, his moody baritone dripping with (blood)lust as he croons his verse, laden with vampire-flick references. Musically, they’ve gone for a more stripped-back approach, somewhat to their detriment; Jet Fighter Plane has you wishing it was just that bit heavier, and it lacks the immediacy of previous album X.

And while the 80s goth sound is integral to their style the production doesn’t always do them justice, as on the mournful ballad Blue, which suffers from tinny drums and a serious lack of crunch.

Even ghastly synths can’t spoil the brilliant Never, though, which shines due to the pure simplicity of its great chorus. …Monsters is struck with a case of style over substance, and while hardcore fans will devour it, it’s unlikely to tip over anyone still sitting on the fence.