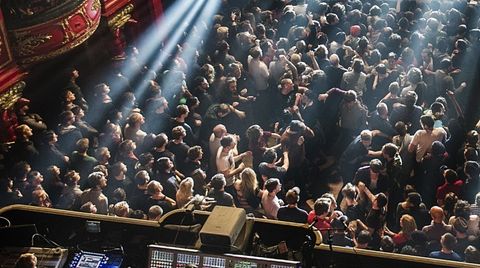 Sparks’ absurd career, from their beginnings as Halfnelson in 1968, has been a parade of change and surrealism like no one else’s. From playing to waitresses in Los Angeles to becoming unlikely glam rock stars, to their Moroder disco era (a third of a century before Daft Punk) and their pop 80s, Sparks are indefatigable. And, at an age when most acts are musically bankrupt, the Mael brothers entered the 21st century making records that crossed Michael Nyman with Larry David, mocking Morrissey and working with Franz Ferdinand. Now, in 2017, with a Top 10 album, Hippopotamus, Sparks tour Britain with a full band and some very silly trousers.

The set careers through their past like a drunk pinball, pinging off new songs like the God-narrated What The Hell Is It This Time? and the recent hit Edith Piaf (Said It Better Than Me). Russell Mael remains in superb voice, while Ron remains static and emphatic.

There are singles galore – Never Turn Your Back On Mother Earth, This Town Ain’t Big Enough For Both Of Us and the sweet 80s pop of When I’m With You.

After an oddly moving singalong to My Baby’s Taking Me Home and a jaw-dropping The Number One Song In Heaven, the Mael brothers lose the masks for heartfelt speeches. After that, we’re out on a fire-spitting Amateur Hour. A brilliant night.