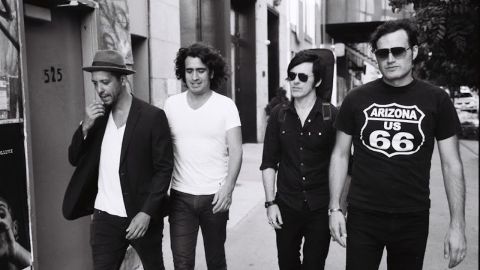 Once upon a time these Noo Yawk hoods called themselves Wizard Sex, but then I’m guessing they finally sobered up and so, Savage Hearts. Whatever you call them, the music they play is spectacularly confident, true gunslinger blues, a steely eyed melange of ’78 punk, clattering garage rock, wobbly surf, ear-raking shoegaze and plenty of hardcore, edge-of-your-seat, sax-skronking, tambourine-shaking, inner-city rock’n’roll. I don’t even know who to compare them to, which is nice, except maybe Jim Thirlwell fronting Warrior Soul, which sounds insane, so never mind.

Witch And Wizard just fucking rocks, man, thoroughly and utterly and with no regard for your safety. And it changes and morphs as it goes along. The first clutch of openers are full-tilt thunderboogie with mythical themes (Art God, Witch And Wizard, Werewolf), but as things roll forward, you get spaghetti western ballads (No Matter), bulging eyeball power-sleaze (Vaudeville) and sputtering art-noise (Cosmic Wife). It’s a real goddamn roller coaster, man. Helluva ride. (8⁄10)

Hard Doom is the craziest, bloodiest, most bare-knuckled Black Sabbath rip-off we’ve heard round these parts in ages. It’s like Electric Funeral as played by motorcycle daredevils while they’re jumping over fire-belching pits of death. Also, every song on the album is so long that you can actually see yourself grow older if you stare into a mirror while listening to it. (6⁄10)

Razorbats are Swedes who are clearly high on glammy, gooey, foot-stomping rock’n’roll. It’s like Heavy Pettin on roller skates, or the Bay City Rollers if they formed on the Sunset Strip in 1985, or maybe the bubblegum Hellacopters. I mean, you get what I’m driving at here, right? Camp Rock is fun, frivolous and perfect for your next lost weekend. (7⁄10)

Street Clones: Cloned For Your Pleasure

Remember North Carolina scum-rockers Rapegoat? Well, their square-baiting frontman John Baptist is back with Street Clones, a fantastically obnoxious punk’n’roll band. I mean, you can practically feel the spittle flying right through the speakers on this. It’s like Jello Biafra singing with the Dead Boys. Gloriously belligerent. (6⁄10)