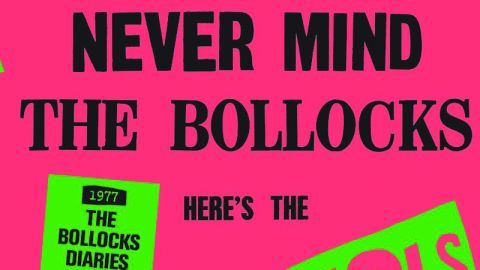 In between the chaos and the moral-outrage headlines and the occasional gig, that’s what comes across most. The most fun to be had from this delightful tease of a cash-in book is looking at all the photographs and clippings: here’s the lads mugging it up next to the Berlin Wall; here’s Sid talking to a copper; there’s a Jamie Reid Jubilee mug and button set; there’s a marvellousshot of Virgin Records And Tapes all graffiti-ed over to promote Bollocks. The Sun front pages, Evening Standard front pages – ‘Police move in on Punk Rock Shops’ (above a telling “We don’t lean – Maggie”). And in between, recollections from those Who Were There – Temple, Westwood, Lydon suitably sardonic and cutting, Jones and Matlock, engineers, secretaries… all beautifully designed and framed, lifting it above the standard ‘In Their Own Words’ mould. Ostensibly, the story of an era-shaking album. In actuality, a blast.