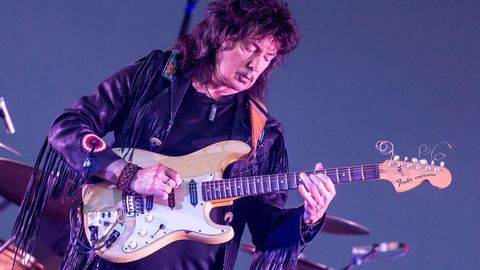 When Blackmore (in black bell-bottoms and fringed jacket) enters the stage at last, the crowd goes nuts, and the whistleblowers were right: they open with Highway Star, but in a singalong style (Black Night gets the same treatment later on).

Quibbles? Blackmore could have hired a more appropriate rhythm section: bassist Bob Nouveau’s style is way too funky for this classic hard rock set, and Bob Keith’s drum set looked like one Cozy Powell might have received for his ninth birthday. And maybe, just maybe, Rainbow could have played more Rainbow songs.

After all, that’s what the punters expect at a Rainbow concert, right? If you promote a series of comeback rock shows as being “nostalgic”, why not give people the nostalgia they might expect from the Rainbow Rising tour shirts - with the 1976 dates on the back - available for 25 euros at the merch stall?

The crowd’s reaction to last night’s climax of Long Live Rock’n’Roll and Stargazer was truly amazing. It felt like the place had erupted, with people dancing and singing all over the place, having the time of their lives. But if we’re ever to see All Night Long or I Surrender or Starstruck or Sixteenth Century Greensleeves in the future (if there is one!), perhaps Blackmore could leave out lesser Purple standards like Perfect Strangers.

And maybe they could open with Kill The King.

Black Night
Smoke on the Water