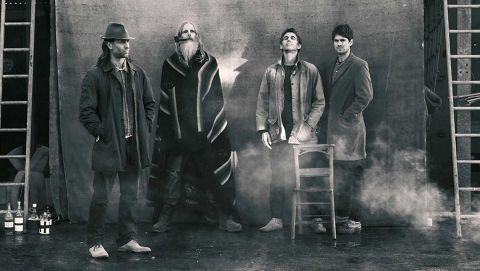 Success and fame, as they say about greatness, was rather thrust upon Reef, and they didn’t always wear it well. To an outsider it seemed that all they really wanted was to make their music – and achieve whatever came as a result in their own good time. They appeared to struggle with the work/life balance on a major label, although Sony helped them make and release four fine albums.

Nevertheless, after adding five new tracks to a 2003 ‘best of’, Reef splintered. Singer Gary Stringer and bassist Jack Bessant stayed closest, and all four came together sporadically until, in 2014, Jesse Wood took over on guitar from Kenwyn House (who went off to form Goldray) and, with Dominic Greensmith back on the drum stool, Reef began again.

Don’t be fooled by their new album’s AC/DC-alike title-track opener, or the other full-throttle rocker, Precious Metal, the band have mellowed as well as improved while they’ve been away. The earliest evidence of this is Sheryl Crow duetting with Stringer on second track My Sweet Love – an unexpected and lovely touch. Reef then inject a Caribbean feel for Provide – which might have been at home on a latter-day Joe Cocker album. The musical compass swings again for How I Got Over, which starts with the piano hook from Otis Redding’s Hard To Handle, then shifts immediately to a gospel vibe complete with hallelujah chorus.

Reef? That rockin’ little band that sang Place Your Hands? Yup! But they’re all growed up now.

Their decision to re-hire George Drakoulias, the former Black Crowes producer who’d been at the helm for Reef’s platinum-selling second album Glow (’97) and its successor Rides (’99) – has clearly invigorated them. And so they give us bluesy love ballad Don’t Go Changing Your Mind, First Mistake, on which, after a Cream-like intro, an acoustic guitar joins the mix to give an almost country feel, and Darling Be Home Soon, complete with female backing vocals, a brass section and a Sly & The Family Stone groove.

If you want rock from Reef, they still do, slowing down for Just Feel Love, a heavy-duty blues with a fuzzy guitar solo and driving drums, and shuffle by on a snake-hipped riff that turns Ball And Chain into a 21st-century Hush. The album ends with shades of Traffic on Like A Ship (Without A Sail), with the gospel choir again and Stringer signing off with a joyous high note near the end.

So don’t be fooled by this album’s title. Reef know where they’re going. Good things come to those who wait.