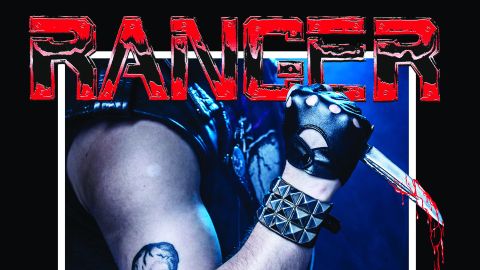 Finland’s Ranger look to the west – not to the US, but to the icy wastes of Canada, the cover of their second album paying homage to the bloody knife found on Exciter’s classic Heavy Metal Maniac.

Speed & Violence is a title that pretty much sums up this Helsinki quartet, who are so metal that if you cut them they bleed riffs.

Drawing on the likes of the aforementioned Exciter and fellow Canadians Razor, as well as the debuts from Slayer and Metallica, Speed & Violence does exactly what it says on the tin. After a suitably spooky intro, lifted straight from the sort of budget straight-to-VHS Italian b-movies that you just want to kick back to after a hard day’s headbanging and driving old muscle cars, the eponymous opener is a hyperkinetic blast of frenzied speed metal with plenty of nods to Agent Steel. With titles like Lethal Force, Shock Troops and Night Slasher there is no doubt that Ranger were born too late. This is an album for watching Arnie films and listening to the late great Tommy Vance on the radio. It’s the sort of album you would have bought on import in Shades Records in 1984. That’s not to so say it’s any way ironic or knowing. Ranger really mean it. They live for heavy metal and just prefer to live as if the 90s had never happened. Every note is wrapped in black leather; every syllable chimes with bulletbelts – there’s an erratic impulse here you just can’t fake.

Having emerged on the recent wave of vintage metal as championed by Fenriz’s Band Of The Week and small DIY festivals like London’s Live Evil, you might wonder why a label like Spinefarm – more often associated with the likes of Nightwish and Rammstein – have signed such an underground band. But whilst so many of their peers have faltered or fallen by the wayside in the meantime, Ranger are still standard bearers for the 80s metal scene. Speed & Violence captures the furious magic of one of the best live bands to have erupted in the last few years. If you’re looking for groundbreaking, look elsewhere. But if you are looking for amphetamine-fuelled speed metal played with total conviction and delivered with real fire then sign here – in blood for preference. Neckbraces and studded wristbands are optional, but definitely advised.