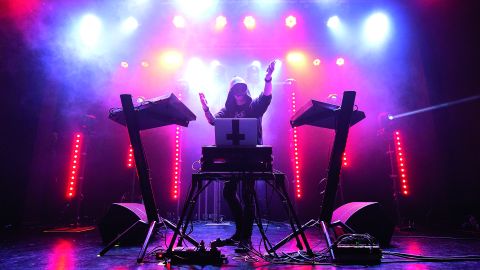 It’s not often that the first support act is the one that leaves the biggest impression; after all, it’s the main event you pay to see at a gig. But, despite their short opening set, that’s exactly the kind of impact SLEEP TOKEN [7] have. Mostly, it’s because they are genuinely interesting and unique: a mix of crashing, doom-laden breakdowns and forlorn vocals that evoke the distinctly non-metal tones of Sam Smith. Somehow, it works. Next up areHYPNO5E [5], who start promisingly, entering the stage to a low electronic drone and ominous purple lighting that sets the scene for their meandering prog-metal. But the mood soon nosedives; they sound dated next to the prog/pop mashup of Sleep Token, and the encore and bow at the end is simply bizarre behaviour from a support band. PERTURBATOR [7], aka James Kent, despite being an anomalous presence in the metal scene, has a vocal fanbase. He enters, face half-hidden by an oversized black hoodie, and shows how he’s captured rock audiences. His tracks mix retro-powered EDM with a dark and dirty edge like Pendulum and MSTRKRFT, and there’s an unashamed nerdiness to his music. The gritty fuzz of opening track Neo Tokyo could just as easily soundtrack a rave as it could a frenzied shoot ’em up arcade game, as could most of his sinister beats (as anyone who’s seen his 8-bit inspired music videos will know). This is party music for people who don’t like party music.