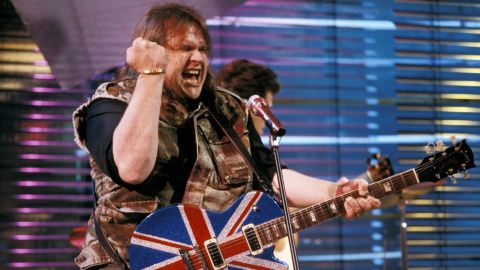 Meat sure screwed up the 1980s

Thanks to drug-induced vocal problems, scheduling issues, label deadlines and legal wrangles insisting that Meat, ahem, butt out of Hell, the golden hook-up of Meat Loaf and Jim Steinman that had flogged 43 million copies of 1977’s legendary Bat… opus spluttered to a halt after their second album together, 1981’s Dead Ringer. Despite Steinman agreeing to write for subsequent albums, Meat was forced to plough ahead with new songwriters, losing vast swathes of inspired soft metal pomp along the way and seeing his sales slump as dramatically as his upper octaves warbled.

**That said, he had his moments **The title track of 1983’s Midnight At The Lost And Found ranks amongst Meat’s catchiest pop numbers and even these reissues from the bottom of his 80s career dip, Bad Attitude from 1984 and 1986’s Blind Before I Stop, are speckled with magic. Bad Attitude’s strident and sparkling keynote single Modern Girl has Meat hollering his new American Dream – “give me the future with a modern girl” – over a choir of harmonising Hellians and glossy 80s powerchords while Blind… at least has the bolshy rebel rock John Parr duet Rock’n’Roll Mercenaries going for it. If little else.

**Meat really wanted Bad Attitude to be the next Bat. **Right down to the skull-strewn motorbike artwork the album harks back to his Steinman work, but a bit more Footloose. There’s two previously-released Steinman tracks in the shape of the synth pop Nowhere Fast and the gloriously grandiose Surf’s Up while Cheatin’ In Your Dreams revisits the 50s doo-wop rock of Meat’s Rocky Horror roots and Jumpin’ The Gun does its damndest to be Dead Ringer with Zee Carling playing understudy to Cher. Meat puts his full weight behind his vocals too: witness his I-can-bawl-louder-than-you Gladiatorial tonsil battle with The Who’s Roger Daltrey on the title track.

**Blind Before I Stop, on the other hand, sounds somewhat, um, tossed off **As if beaten lifeless by the decade of his worst nightmares, Blind… finds Meat’s bombastic inner beast caged, tranquilised and plastinated by the 80s. Spangly AOR production smothers every song with synthesized horns, keytars, speedway guitars and plastic drumbeats until it’s bland as Boston and trite as T’Pau. The idea of Meat swapping his leather biker garb for a rolled-sleeve pink blazer and transforming into a mullet-pop sex icon was always going to be a tougher sell than an Oscar Pistorius home security service, but when the album’s Bowie-aping highlight Burning Down breaks into a reedy saxophone solo and gospel chorus resembling a half-arsed demo of Donna Summer’s State Of Independence, that sound is a 70s behemoth being glossed over by progress.