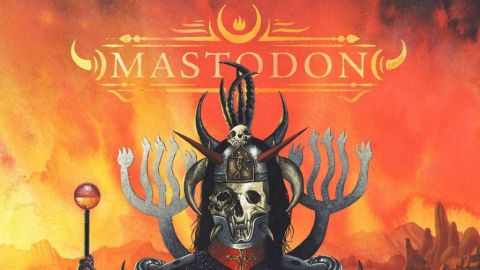 Having formed in 2000, Mastodon are literally a group whose history spans the entire 21st century, but their fearlessly nonpostmodern vision of rock as a vehicle for grandiose conceptual musings on the very basic issues of life is more reminiscent of the 1970s.

Explaining the thematic underpinning of Emperor Of Sand, drummer/vocalist Brann Dailor says, “Sand represents time. If you or anyone you know has ever received a terminal diagnosis, the first thought is about time. Invariably, you ask, ‘How much time is left?’”

There’s no denying that, though any accusation of thunderous triteness is offset on learning that guitarist Bill Kelliher lost his mother to cancer in 2016.

That said, Mastodon have grappled with the theme of mortality on previous releases. The frenetic metal pace of their playing feels like a frantic attempt to play each song as if it were their last one (though occasionally, they do play each song as if it were the previous one), crowded with every last kitchen utensil of energy that their health currently permits them. Each song is a protest song against the inevitable End. Andromeda, for example, sounds like each band member trying to pile down the same hole at once with full kit in tow.

Opener Sultan’s Curse clatters and slaloms through the changes with an urgency that barely lets up throughout the album: ‘Straighten the curve/like a circle to return.’ Show Yourself is a sandblast of defiant desolation, while Steambreather offers a welcome switch in intensity, with its bone-marrow bass and siren guitars, as existential thoughts press hard on Dailor’s mind: ‘I wonder who I am/ Reflections offer nothing/I wonder where I stand/ I’m afraid of myself.’

There are passages of experimentation around this album’s edges, such as the post-nuclear drones of Roots Remain, and electronic effects that suggest prolonged exposure to mid-period Tangerine Dream. But Mastodon never really develop these intriguing tendencies – they’re quickly back to their familiar trademark high-heartbeat metal, like the thunderous gallop of the Four Horsemen Of The Apocalypse.

Closer Jaguar God does offer some acoustic respite, as the clouds they’ve worked up break temporarily and there’s a chance to gaze at the uncertain horizon. But for all the anxiety that fires their work, you suspect that this album is a link in the middle of a chain of assuring familiarity that will eventually constitute their career.