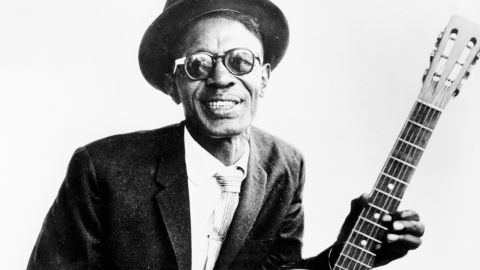 Soul Jam’s policy with these twofers seems to be to find a pair of albums made around the same time but not cut from the same cloth. Mojo Hand, recorded in late 1960 for Bobby Robinson’s Fire label, has the singer-guitarist playing somewhat amplified, with a well-behaved rhythm section and a good deal of studio echo. The echo apart, this is pretty much as Lightnin’ would been heard in the clubs of Houston, performing personal favourites such as Mojo Hand or Shine On Moon!. Out of left field comes Have You Ever Loved A Woman, one of the small group of recordings where he played piano.

Blues In My Bottle, his third LP for Bluesville, was recorded by the folklorists Kenneth Goldstein and Mack McCormick and is much more of what used to be called a ‘folk blues’ album.

Hopkins plays acoustic guitar, closely miked for intimacy, and ignores familiar repertoire in favour of older pieces such as the title number, Catfish Blues or Goin’ To Dallas To See My Pony Run. In Buddy Brown’s Blues he quotes his predecessor Texas Alexander, and he retells some of his own history in Beans, Beans, Beans, a monologue about working on a railroad gang.

Two dark blues contemplate extinction. DC-7 was inspired by his mother’s memory of a plane crash near the family home, after which she counselled her son not to travel by air. He occasionally disregarded her – as when he flew to Europe for the 1964 American Folk Blues Festival – but he always felt uncomfortable about it.

The next track is Death Bells. Here Hopkins is not looking back into his past but uneasily into his future, as he hears ‘death bells all ringin’ in my ear’ and speculates on ‘what kind of chariot gonna take me away from here’.

In contrast, he offers an affectionate tribute to a forebear in My Grandpa Is Old Too!: ‘Says, “Give me my pipe, so’” – he had it in his mouth.’ And then there’s a romp through Sticks McGhee’s Wine Spodee-O-Dee.

Soul Jam talk up their selections: Mojo Hand is “one of Hopkins’ greatest & rarest LP releases”, while Blues In My Bottle is “one of the greatest albums in Hopkins’ catalogue”. In fact, Hopkins’ most potent work was largely done on singles in the late 40s and 50s, for labels such as Gold Star, Imperial, RPM and Sittin’ In With, subsequently compiled on LPs and CDs by Arhoolie, Classics and Ace.

Few of his LPs from the 60s and 70s maintained the same level of intensity as that early work, but it was never likely that they would. Their producers seemed to feel that every session, like every personal appearance, should reflect light as well as shade, and that the sombre mood of a Death Bells should be dispelled by the inanities of Wine Spodee-O-Dee. To be fair, that was probably how Hopkins preferred to work too.

Listening half a century later, we’re free to disagree, and to value him most when he dug deepest.