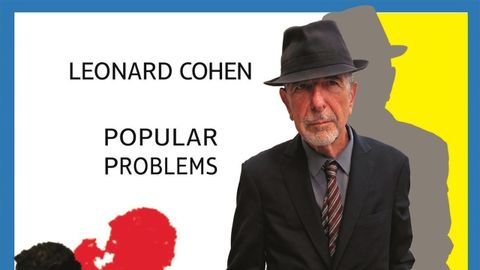 How will you celebrate your 80th birthday? With typical wry modesty, the gravel-voiced Zen Master of song has chosen to release a magnificent new album as good as anything in his half-century catalogue of classics.

While he was famously forced out of semi-retirement after his pension fund was depleted by a former manager, Cohen’s financial calamity has been a windfall for everyone else, and Popular Problems is just the latest chapter in his magisterial third-act comeback. Laughing in the face of creeping mortality and cosmic cruelty, the Samuel Beckett of philosophical balladry is back.

Like 2012’s Old Ideas, Popular Problems is a collaboration with former Madonna producer and co-writer Patrick Leonard. The songs are vintage late-period Lenny: witty, rueful, lyrically profound yet beautifully simple confessionals clothed in stripped-down folk, blues and gospel. An elegant spine of Latin percussion drives Almost Like The Blues, a light country twang skips through Did I Ever Love, while the gorgeous Nevermind combines skeletal electronica with Arabic-sounding vocal shadings.

All sublime arrangements, but the most remarkable instrument of all remains Cohen’s basso profundo voice, which grows ever more emotively pockmarked and parched with each passing year. The result is an autumnal masterpiece to rank alongside anything by Bob Dylan or Johnny Cash.