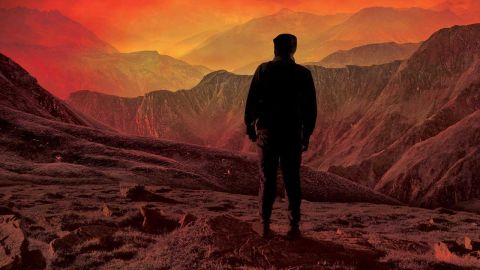 The “other stuff” that Bonamassa says weighed him down as he wrote this thirteenth studio album sounds heavy enough to be grief, but from his lyrics seems to be a messy, guilty break-up. Even after sifting through the pronouns on songs such as the title track for clues, it’s tough to say who was to blame, or for what. But as he blinked away the pain, Bonamassa the blues and rock student and ambitious songwriter must have known he could use it. Want it or not, a breakup album is his next rite of passage to join the greats.

But Bonamassa and regular producer Kevin Shirley haven’t laid down his electric showman’s arms for some starkly penitent, dark acoustic night of the soul. Opener Evil Mama starts with Buddy Rich drums and Memphis horns, and the singer’s jibes at a back-stabbing woman’s ‘lies and… greed’ cleave too closely to standard blues tropes to feel like true pain. Pick Up the Pieces, too, gives its 10-time loser’s tale a brassy strut which could be Cab Calloway sashaying through the Cotton Club, while King Bee Shakedown is a further compendium of big-band and blues clubland raunch.

Deep In the Blues Again is the first clear sign of depressed isolation, but even that’s washed-out world has space for exchanges of fire between the album’s three guitarists, and widescreen choruses. Self-Inflicted Wounds is more lugubriously moody. Amid another epic chorus, it’s Bonamassa’s closing solo that possesses the most defiant, storm-lashed power.

Just ’Cos You Can Don’t Mean You Should slips into soul-blues ballad mode to approach the narrative nub, though blowsy brass again carries the rueful pain away. Redemption then starts with a rusty slide guitar, like the hinge to the door to Bonamassa’s truest feelings, only to slather itself in the sort of gospel-soul backing cries beloved of 80s rockers.

Stronger Now In Broken Places is Redemption’s most musically daring switch, as Bonamassa relies on acoustic guitar and his careful, confiding, sometimes husky tenor. It’s what Sinatra called saloon singing, and suits him.

From his long, sculpted solos to his maximising of limited charisma and vocals, Bonamassa’s art relies on diligent graft, not sloppy emotion. One devastating relationship wasn’t enough to change that. So this is just an especially focused, varied set of entertaining Bonamassa tunes. For his heart on a plate, apply elsewhere.