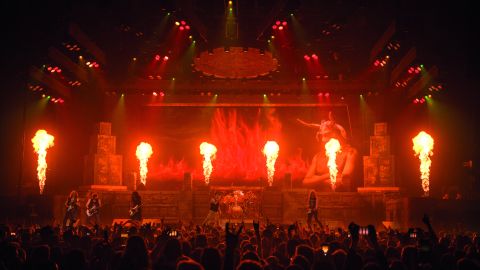 America gets Ghost as support and we get this pile of shit?” While that barb from one disgruntled, peeing punter seems harsh, it’s fair to say that SHINEDOWN [5] are one of the safest options Maiden have ever taken on tour – their bland, middle of the road radio rock unlikely to annoy anyone too much. It’s not that they aren’t earnest, or are even offensively bad; they’re just… so… mlah. That said, they do seem to win over portions of the Motorpoint Arena, and have more than a few fi sts pumping by the end. Fair fucks; though we too would have liked to have seen Ghost, Angry Toilet Lad.

There was no way IRON MAIDEN [8] weren’t going to blow their supporting cast clean out of the arena tonight, and as soon as the lights dim and Doctor Doctor bellows around the building, the atmosphere around the venue switches from Having A Lovely Time to Let’s Go Fucking Mental. Smoke fills the stage as black sheets are whipped away to reveal the band’s imposing Book Of Souls set for the very first time in this city – and, indeed, for only the second time in this country following last year’s Download showing. The eerie opening keys of If Eternity Should Fail boom over the PA, prompting an almighty cheer to greet a hooded Bruce Dickinson as he creeps onstage and lurches over a bubbling cauldron, his voice echoing around the venue. “Here is the soul of a man…” And here, finally, is the first date of Iron Maiden’s proper UK tour, and everything is already looking as fantastically ludicrous as ever.

As Messrs Harris, Smith, Murray and Gers flood the stage and the Maiden army begin duly banging their heads and screaming their lungs out, it’d be easy to be swept away in the delirium that only an Iron Maiden show can bring, but something doesn’t quite sit right for the first couple of songs tonight. There are occasional, very subtle mistimings within the band and it’s unclear whether there’s a minor mic malfunction or Bruce isn’t quite keeping pace like usual (as the show progresses, we strongly suspect the former). It’s nothing that seems to bother the few thousand people singing their heads off, of course, but as the metal legends kick into Speed Of Light, they still don’t quite seem to be fully finding their rhythm.

“’Ello!” beams Bruce during a brief pause, showing no signs of there being any issues whatsoever, before adding to laughs: “I’m, like, 70, and I’m the youngest guy here!” It’s not the last time he references his or his comrades’ age, and Maiden have never been afraid to poke a bit of fun at themselves, but coupled with a less than flying start, it’s hard to stop those questions drifting back in again. After all, at some point you have to draw the line and recognise the moment you’re finally witnessing a band tiptoe over the wrong end of the rollercoaster, and the idea that Maiden may have taken a definitive step down in the live arena is a firmly depressing one.

Lucky, then, that Wrathchild seems to bring everything back on track, and from then on in Maiden’s set typically merges the epic (a mighty Iron Maiden complete with reimagined, blow-up Eddie) with the sublime (a stunning The Red And The Black, complete with a blood red-doused stage) and the ridiculous (Death Or Glory, with Bruce – chimp mask dangling off his head – demanding that the Nottingham fans quite literally “Climb like a monkey!” Needless to say, everyone – Hammer included – duly oblige).

Perhaps there was simply still a bit of finetuning to be done this early into the tour, but there are few other signs of any issues for the rest of the two hours Maiden are onstage, and the crowd are lapping up just about everything the metal titans throw at them. That said, Bruce’s stage patter is a bit odd at times, at one point going on a three minute-rant about American beer being a bit crap and also asking permission to “speak the Queen’s English” now that the band are back on home soil. A potentially misfired comment given the current climate in the UK, but Nottingham takes it in good jest, and it’s barely a few minutes later before the singer is attacking the divisive nature of British politics and reminding us that “white, black, brown or blue”, everyone is welcome at an Iron Maiden gig. And, as a stunning encore of The Number Of The Beast, Blood Brothers and Wasted Years bring the show to a triumphant close, any teething issues or eccentric rants are long forgotten. Another year, another killer Iron Maiden tour, basically. Let’s hope they still have a few more rounds left in the tank yet.