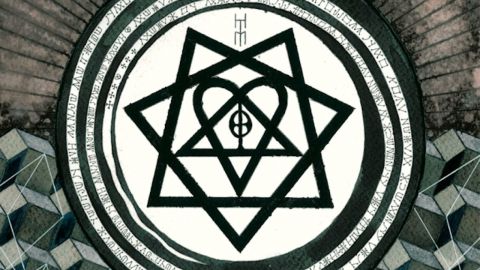 There have always been two sides to HIM’s polished metal coin. The Finns’ last album, 2010’s Screamworks: Love In Theory And Practice, was made of the lighter stuff and, let’s be honest, not everyone really ‘got’ it. In contrast, Tears On Tape embraces their darker, heavier side. In fact, it’s so heavy it gives Venus Doom, Love Metal and even Greatest Lovesongs Vol. 666 a run for their money. Produced by Hiili Hiilesmaa and mixed by Tim Palmer – the team behind Love Metal – Tears On Tape is the album HIM were destined to make, revealing itself as a summing-up and surpassing of their career to date.

Comprising nine songs and four instrumentals – more on those later – Tears On Tape is the album that almost didn’t happen. Just as they were about to start recording, drummer Gas Lipstick was diagnosed with repetitive strain injury and doctors ordered him not to play again until he was healed. HIM have admitted it was a very dark time for them and they even wondered whether to call it a day, but instead they waited and channelled all that darkness into their finest work to date.

The result is packed with their tightest songwriting yet, combining the heaviness of their heroes Black Sabbath with rich, moody melodies and, invariably, plenty of satisfying, singalong choruses. Last year’s cover of Ké Strange World offered a taster of the behemoth in store and although that track is not included here, album opener Unleash The Red sets a similar tone. This bijou instrumental kicks off with a synth-pop melody that sounds like it should be on the soundtrack to an 80s teen movie before erupting into the crunch and grind of the melancholic All Lips Go Blue.

The love metal harmonies the band made their trademark are still there but this is far more metal than anything they’ve done before, dripping with feedback, distortion and one of the most awesome guitar solos Linde has ever written. Imagine Your Sweet Six Six Six combined with Sleepwalking Past Hope and The Sacrament then add even more chunky riffs to get the idea. This theme continues throughout the album with the heartfelt No Love and WLSTD (When Love Starts To Die), both of which will surely be live favourites soon.

Then there are the aforementioned instrumentals, which are quite possibly the most unusual pieces of music the quintet have created to date. Venus Doom hinted at HIM’s gloomier side but Tears On Tape goes beyond that with their creepiest ever passages. Trapped In Autumn’s eerie, celestial interlude and Lucifer’s Chorale’s cranium-scraping frequencies and grim ambiences in particular pull out all the stops and sound like they wouldn’t be out of place lurking in the background of a Dario Argento horror flick.

The Metal Hammer fanpack also includes brand new and exclusive versions of Buried Alive By Love and The Kiss Of Dawn recorded live at Finnvox studio, which give a raw new take on two of the band’s classic songs. It’s something of a cliché to say that a band’s new album is their best yet but in the case of Tears On Tape that cliché is 100 per cent true.