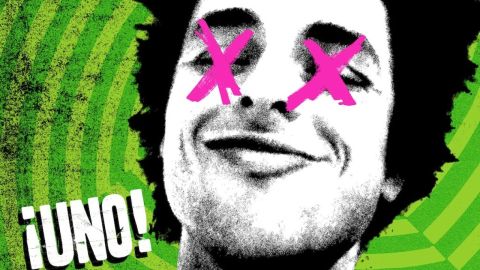 Use Your Illusion I & II. Lucky Town and Human Touch. Nelly’s Suit and Sweat. History asserts that an act thinking they have enough brilliant new material to release two entirely separate albums back-to-back generally only have enough for one, at a push. Few have made it work – System Of A Down and Bright Eyes yes, Metallica and Radiohead arguably – and no major rock act has ever attempted to do a Billboard Bolt and go for the triple. Until now.

Green Day’s albums have long been bursting at their frayed denim seams. 2003’s American Idiot was a multi-segment, anti-war rock opera about the Jesus of Suburbia that crystalised US counter culture’s outrage at the Bush administration and the Iraq War, sold five million and spawned a Broadway musical and motion picture spin-off. Its 2009 follow-up, 21st Century Breakdown, widened the scope of their political punk rocket-launcher to take in religious hypocrisies, the medicated nation, apocalyptic visions and calls for violent revolution. These were concept albums crammed with messages, modern moralities and righteous rebellion; dumb punk Das Kapitals eager to kick down the barriers of what a rock’n’roll album can achieve.

Having stretched the edges of the single disc format to snapping point, the multiple album seemed an inevitable next step. But Green Day are pushing even this concept into bold new territories. ¡Uno! is the first of three albums they’ll release bi-monthly, with ¡Dos! dropping in November and ¡Tré! terrorising January 2013. The make-up of ¡Uno! hints that the triptych might form a loose band autobiography – at a spritely 41 minutes and shorn of flam and fiction, it barrels through 12 Celtic-shaded punk pop bangers in the style of 1994’s early breakthrough record Dookie, rarely breaking a four-minute sweat and entirely discarding the rock opera pomp that’s laced their last decade. ¡Uno! appears to be The Green Day Story: Chapter One.

Any lingering momentum from 21st Century Breakdown’s socio-political roundhouses is expelled in the first few tracks. Nuclear Family, in a flurry of jet-skiiing rock’n’roll riffs, bemoans the ‘death of the nuclear family’, but more from youthful hedonism tainting the ideal than any sort of oppression: ‘I’m gonna ride the world like a merry-go-round’, yowls Billie Joe Armstrong, flush once more with carefree exuberance, the only apocalypse on his mind a thermonuclear drinking spree (‘like a nuclear bomb, it won’t be long till I detonate’). The powerchord shanty Carpe Diem brings the album’s only whiff of warfare with its talk of bomb threats and being ‘too young to die’, but even this is couched in a celebration of life and youth resembling a cross between American Pie and Dead Poet’s Society. Between those two is plonked the emo pop hook-storm Stay The Night, a classic tale of lusty rutting against the bins round the back of the prom.

Green Day may be in their 25th year, but ¡Uno! opens like a bunch of teens revving their punk pop two-wheelers, ready to smash through the garage doors. From there it’s a full throttle ram-a-lama riot, with Billie Joe’s anger issues increasingly taking the handlebars. Let Yourself Go – a bilious bite-back at boring blokes in bars – is sheer pogo abandon complete with Armstrong gargling ‘Gotta let it go!’ like a biker-joint Golum and unleashing a solo that sounds like BB King on fast-forward. Loss Of Control is The Ramones bent on high school revenge. And, on a similarly slaughterous theme, first single Kill The DJ stands out as a rare stylistic side-step, a funky disco blues smacking of Artic Monkeys and Hard-Fi that finds Armstrong driven so insane by street beats and bad booze in a park that he demands the cold-blooded assassination of DJs playing, um, funky disco blues. It’s the most anti-dancefloor dancefloor song since The Smiths’ Panic.

An exultant opening, a mid-album chunk of savagery, then ¡Uno! gradually shifts towards maturity. Rusty James’s portrait of the lonely last biker in a run-down town oozes AOR slickness and closer Oh Love brings the story up to the Queen-style military rallies of American Idiot. By reanimating their early punk snarls they inevitably end up mimicking bands that they originally inspired along the way – Trouble Maker is essentially The Hives’ Main Offender, for example, and Sweet could be a long lost Weezer classic – but ¡Uno! is nonetheless a consistent collection of top-hole melodic punk pop that finds Green Day back at their youthful best, burning up the beaches, chugging Buds and not caring for the storm on the horizon.

Will ¡Dos! be the Dystopian diatribe and ¡Tré! the experimental wubstep slab of the emo future? We can but hope.