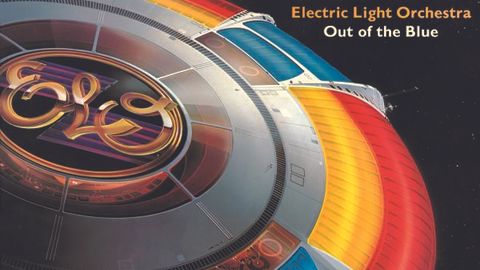 ELO were everywhere, omnipotent in the 1970s. Perfect driving music. For a generation of befuddled dole-tainted schoolchildren, Jeff Lynne in all his pomp: curly pseudo-Afro perm, denim flares, pilot sunglasses, immaculately-kept beard, spaceships; signified an entire era. But at the height of punk, for many of us he was an object of scorn with his symphonic pop pretensions, concept albums and overwrought strings. The fact remains however, that Out Of The Blue is the finest concept album written about the weather ever recorded.

In 1970, Lynne formed ELO in Birmingham alongside Roy Wood (The Move) and drummer Bev Bevan with the intention of creating modern pop songs with classical overtones and a distinct Beatles influence. So distinct that ELO were famously described as “sons of the Beatles” by John Lennon himself, and the three other Beatles all collaborated with Lynne (including on ‘new’ Beatles tracks). This description has become codified over the years – possibly by Lynne himself, who has never been shy of a little self-belief – to the band The Beatles could have been. If we can ignore Wings for a moment.

Truth or hyperbole? It all depends on how well-produced you like your pop music. Bombast or silence? Space or texture? The finest ELO songs (Wild West Hero, Steppin Out, The Diary Of Horace Wimp) had a heart of melancholy to them that could not be disguised, no matter how many layers of synthwere added. Or spaceships. Indeed, the juxtaposition of the spaceships only served to hearten the humanity at the core. The era-devouring monster, 1977’s concept album Out Of The Blue had many such moments, in between the sound of thunder crashing and rain lashing, and spookily-disconnected vocodered vocals 30 years ahead of schedule. Have a listen to side three, the symphonic Concerto For A Rainy Day. Not punk at all, and derided by those who considered themselves such, but still loved by most. Except ofcourse by those who hated them. (Rolling Stone held at the time that the album was “perfectly hollow and bland”, simultaneously grasping the point and completely missing it.)

And, oh my GOD! Turn To Stone!

The 40th anniversary reissue will feature the vinyl edition released on picture disc. One up on the original yellow vinyl for Wild West Hero.