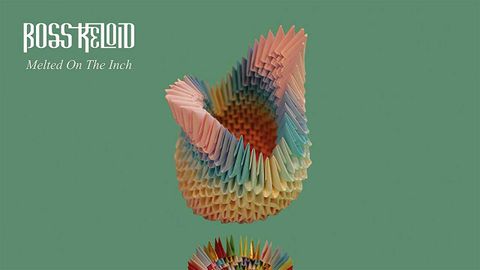 Melted On The Inch

Boss Keloid’s sophomore album, 2016’s Herb Your Enthusiasm, catapulted the Wigan quintet onto the world’s radar with a transfixing synthesis of prog, psych, stoner and doom, showcasing a broadened compositional outlook that extended well beyond the middle of the prog metal pack. Sidestepping any urge to rehash the formula, Melted On The Inch is their most ambitious effort yet. This is a resinous journey into the gauzy realm of mesmerising grooves, prismatic melodies and towering metal riffage, incorporating even more influences, more tonal experimentalism and more inventive song structures than ever before. Opener Chronosiam delivers a statement of intent with an onslaught of sharp, slamming riffs and a soaring, anthemic chorus. Alternately bludgeoning and intricate, the track employs thudding percussive repetition and eerie keyboards as a rhythmic build-up to the bone-crushing climax, like a long fuse running into a bundle of dynamite. Had the band revisited this blueprint throughout the remainder of the tracks, we’d be left with just another prog metal album, but Chronosiam is a launchpad for something far greater. Tarku Shavel showcases a deft command of melodic innovation and a knack for composing lush, memorable choruses that betray an innate fragility never overshadowed by the heaviness within the tracks.

Over the years vocalist/guitarist Alex Hurst has been compared to Clutch’s Neil Fallon, with both singers boasting prodigious gifts for storytelling, not to mention a smooth, barrel-aged bellow. Yet with Melted On The Inch he delivers a more nuanced and refined performance, particularly on Lokannok – an enthralling exercise in uber-heavy psychedelia. With guitarist Paul Swarbrick, drummer Ste Arands, keyboardist Matthew Milne and bassist Charlie Seisay, Boss Keloid have composed a work of jaw-dropping technicality and provocative emotional depth. One listen isn’t enough to connect with these six tracks; this record needs to be thrown on repeat and absorbed at a cellular level. Plan on hearing a lot about this record in 2018.