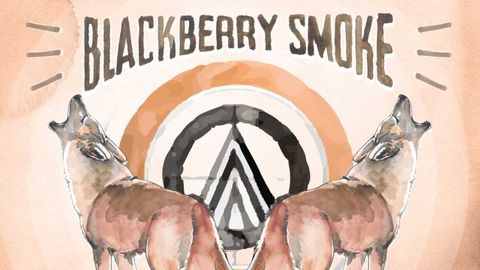 So, Lynyrd Skynyrd plan to roll up the Dixie flag and kick off their cowboy boots after one last rodeo. That means a vacancy is opening up for the role of Big Kahunas of southern rock’s outlaw nation. Applicants must have a working knowledge of rock’n’roll, a pick- up truck full of Hank Williams records and a lifetime membership of the NRA.

Given the febrile state of music south of the Mason-Dixon line right now, there’s no shortage of people waiting in line to throw their Stetsons into the ring, among them The Cadillac Three, Whiskey Myers, Lee Bains III & The Glory Fires, restless shitkickers one and all, resurrecting the immortal spirit of Ronnie Van Zant. And let’s not rule out the Nashville crew: mavericks such as Chris Stapleton, Eric Church and Sturgill Simpson, who have stripped country music of its rhinestone chintz and dug deep into its rebel soul.

And then there’s Blackberry Smoke. More than anyone else the Atlanta, Georgia band have engineered themselves into a position at the forefront of the modern southern rock pack. Their first five albums saw them staking out a pitch that exists somewhere between Download, Dodge City and a NASCAR rally. It’s worked for them – their last record, Like An Arrow, hit No.1 in the US country and UK rock charts. Ker-twang!

Like Skynyrd and all the other great southern rock bands who came after them, Blackberry Smoke know the value of keeping it simple. They play music for the people, pure and simple, stripped of pretension and artifice. There’s a chunk of rock’n’roll here, a little bit of boogie there, a touch of country twangin’ for the good ol’ boys. They deploy a bar-room piano for the good times, a crying guitar for the bad, and a little bit of fiddle for when they want things to get wild. It’s an age-old formula, but one that they’ve got locked down.

It’s also a formula that their new, sixth album follows to the letter. Frontman and chief songwriter Charlie Starr has talked about wanting to write more “complex” songs, but there’s little real evidence of that here. The album kicks off with a fade-in, but it’s the sound of a fuzzy, choogling guitar rather than any incoming prog-style musical odyssey. The song it introduces, Flesh And Bone, arranges all the pieces in the correct order from the start: a big, bar-room beat, a riff that ZZ Top wouldn’t be ashamed of, great washes of organ and a chorus the size of the Chattahoochee River. It’s the kind of sound you can imagine spilling out of back-room bars and spit-’n’-sawdust saloons from Des Moines to Dartford.

Starr’s proclamations aside, nobody is ever going to accuse Blackberry Smoke of overcomplicating things. Find A Light follows the old maxim of keeping it simple, stupid, right down to the route-one song titles. As the name suggests, I’ll Keep Ramblin’ is a no-frills boogie-shuffle featuring a guest appearance from rising pedal steel star Robert Randolph and some solid-gold testifyin’ from a bunch of passing female backing singers. It’s simple to the point of boneheadedness, but it’s got guts. Lord Strike Me Down bundles the melody from The Beatles’ I’ve Got A Feeling into the boot of its car and transports it over the state line to Muscle Shoals studio in Alabama. Best of all is Nobody Gives A Damn, a steel-plated ripper that sounds like AC/DC might if they’d grown up on Waylon Jennings and grits for breakfast rather than Chuck Berry and 60 Marlboro a day.

But Blackberry Smoke have also always been adept at taking things down a notch or two and finding a quiet corner in the bar- room of life. I’ve Got This Song might be
a contender for Most Perfunctory Title Ever, but it’s a beautifully low-key confessional, all haunting fiddle and heart-on-sleeve regret. Close behind is Seems So Far, a strummed meditation on ageing that fleetingly nods to Bob Marley’s Redemption Song, which, remarkably, isn’t quite as embarrassing as it sounds.

There’s nothing here to scare the horses. The closest they come to a radical left-turn is Mother Mountain, which connects Appalachian camp-fire tunes with the loose folk music Led Zeppelin were playing with back on their third album. And if there is a problem with Find A Light, that’s it: they don’t quite go far enough.

There are plenty of great songs on here, but no stone-cold classic – we’re still waiting for a Free Bird or a Sweet Home Alabama or even a Simple Man. Six albums in, you can’t help feeling they should be serving that kind of thing up along with the porridge. There’s a danger that they’re locking themselves into a holding pattern – a classic, classy one, but a holding pattern nonetheless.

Still, what Find A Light lacks in radical sonic experimentation – or, frankly, originality – it makes up for in heart. This is unvarnished, unpretentious music played by men who don’t give a flying fiddle what’s going on out there in more fashionable