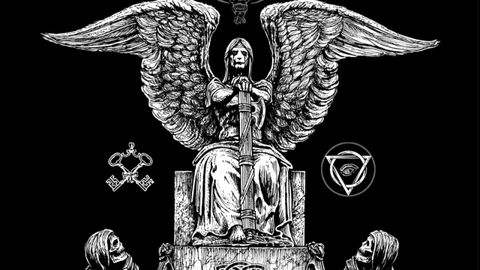 Finland’s murky marauders Archgoat ride forth for yet another abominable assault of all that is pure, decent and wholesome.

Never ones to rush things, this is only the three-piece’s third album in 25 years, but as ever it’s an utter filthstorm of the blasphemous, the profane and some downright smut (Nuns, Cunts And Darkness is the soundtrack for the party you’ve always wanted to have) that takes its cues from the twin behemoths of low-slung black metal: Beherit and Blasphemy.

Is The Apocalyptic Triumphator black or death metal? Well, it’s a bit of both, although it’s not so much music as a heavy tank driven by an unhinged psychopath somehow pressed on vinyl and CD. They could be guitars churning through the album, or in fact they could be chainsaws, and the drums sound more like cleverly choreographed jackhammers. With the cuts like Congregation Of Circumcised and Grand Luciferian Theophany, subtlety was clearly not a consideration, but The Apocalyptic Triumphator is more than the sum of its unrelenting parts. They don’t do much, but when they do the smart underground money takes notice.