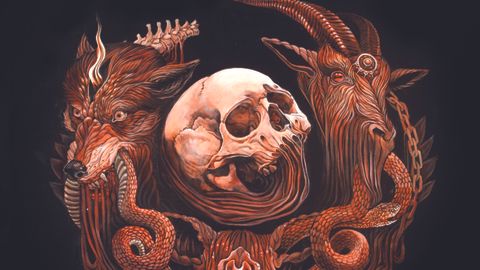 Over the last three years Swedish melodeath behemoths Arch Enemy have pulled off a feat that would be insurmountable for most bands. Switching vocalists is a notoriously tricky business at the best of times. Yet when The Agonist chanteuse Alissa White-Gluz replaced Arch Enemy’s formidable, long-term frontwoman Angela Gossow three years ago, the transition couldn’t have been smoother, with fans accepting Alissa into the fold unequivocally. So going into their 10th album with the heavy lifting out of the way, Arch Enemy can get back to focusing on what they do best. Mostly, Will To Power follows their well-honed template of polished, super-catchy and expertly crafted melodeath, chock-full of florid, rippling leads and colossal, reassuringly crushing riffs.

After intro Set Flame To The Night, guitarist Michael Amott’s trademark smooth, supple fretwork leads the way into a salvo of warmongering cranium-invaders. From the furious, stomping riffery of The Race, to the chrome-plated swagger of Blood In The Water and slick-as-hell crush-fest of The World Is Yours, each is an immediate and memorable call to arms.

This album is Arch Enemy’s first to feature ex-Nevermore legend Jeff Loomis, who replaced guitarist Nick Cordle in late 2014. Despite being Nevermore’s main songsmith, Jeff hasn’t contributed to the songwriting on Will To Power. While it’s bizarre that Arch Enemy haven’t utilised Jeff’s writing chops, undoubtedly his presence has raised the sonic bar. You can clearly hear his impact in the wild, face-melting solos splashed across the album, especially the flurry of frenzied notes on the rampaging Dreams Of Retribution and in the devastating two-part guitar assault of chugging highlight First Day In Hell.

Vocally too, if anything, Alissa’s raspy growls are even stronger this time round, especially during the second, grander and heavier half of the album where the band explore darker themes of personal struggle and revenge. On the dense arrangements of A Fight I Must Win and My Shadow And I, amid strategically placed strings, Alissa’s powerful vocals add another shot of adrenaline to an epic mix.

Of course, her proficiency as a clean vocalist for The Agonist has had fans exchanging worried murmurings since her arrival, and if you’re one of them, you might want to look away now. Not only does Will To Power contain the band’s first dabblings with clean vocals which appear on several tracks as backing vox, it also boasts Reason To Believe, their first ever, largely clean-sung power ballad. Sure, it’s going to be a hard sell for some Arch Enemy fans and it certainly wouldn’t have worked in the Angela era, but here it does, based on a simple, gleaming refrain with a huge chorus and scratchy, big-lunged, clean vocals from Alissa that will demand mass, arms-aloft, singalongs. It’s a brave move for a band who haven’t really deviated sonically from their template for two decades. The majority of Will To Power is sonically very much business as usual, but this is a solid album from a band who, 20 years into their career, are embracing evolution.