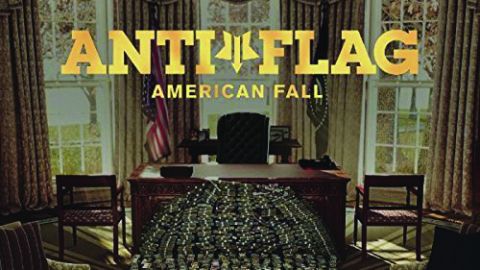 ‘The malice in your voice is a god damn giveaway,’ Pittsburgh punks Anti-Flag spit on the surprisingly upbeat (sound-wise) new single Racists, railing at hypocrites, contemporaries and a US political system so wrong that movements like #blacklivesmatter still have to exist.

Anti-Flag believe passionately in the ability of music to fundamentally alter lives, big hooks or no big hooks, pop-punk or straight thrash. American Fall is their eleventh studio album since the band formed in 1996, and there’s no compromise, no backing down. The anger keeps churning, the hooks keep building. American Attraction begins slow, ominous, before threatening to topple all before its fierce sarcasm; Liar thrashes furiously; When The Wall Falls is one more ska-tinged call-to-arms of friends and allies of Amnesty, Occupy Together and Greenpeace. It’s sometimes reminiscent of Green Day, but none the worse for that.