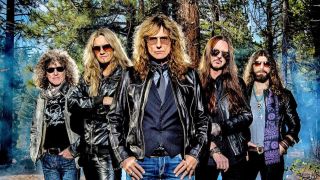 Whitesnake have been announced as the first headliners for the second Ramblin’ Man Fair, which takes place at Mote Park in Kent on July 23 and 24 next year. Joining David Coverdale & Co. on the main stage will be Europe and Ginger Wildheart. Other names will be announced in due course.

The Prog stage will play host to headliners Procol Harum plus Uriah Heep, Hawkwind and Life Signs, while the Country stage will be topped by returnees Hayseed Dixie and the Blues stage will feature Walter Trout and King King.

“We are truly excited and looking forward to playing at the Ramblin’ Man Fair in 2016 on what will be our ‘Greatest Hits World Tour’, and most likely my personal ‘Farewell to Arena Rock’ after over 40 years of writing and performing rock music,” says David Coverdale.

“I look back on an amazing, memorable journey of four decades of fun performing for millions of people,” he continues. “Whitesnake is singularly honoured to headline The Ramblin’ Man Fair, and looking forward to some British Fun in the sun. See You In 2016!”

“We’re having an amazing 2015 with receiving a Classic Rock Award and touring extensively promoting War Of Kings,” say Europe. “Now we have the absolute pleasure in announcing that Europe will be playing Ramblin’ Man Fair together with Whitesnake on July 23 2016. It’s always an enormous pleasure sharing the stage with the great man himself David Coverdale and his entourage!”

Weekend tickets are on sale now.