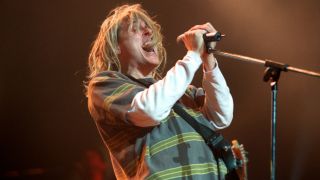 Weird Al Yankovic has spoken about his conversation with Kurt Cobain after the prankster decided to record a parody of Nirvana hit Smells Like Teen Spirit.

In an video interview with Loudwire, Yankovic says he was nervous about asking the Nirvana frontman for permission, but that Cobain was “cool” with the idea.

He says: “I remember that phone conversation very well – I wish I had recorded it, it would have been a nice little piece of history.

“I was very nervous, and I didn’t know how he would take my requesting the parody. But he was extremely cool. I just told him, ‘hey, it’s Weird Al Yankovic and I would love to do a parody of Smells Like Teen Spirit.’

“His initial reaction was, ‘oh, is it going to be a song about food?‘, because a lot of my hits at that time were. I explained it’s about how nobody could understand his lyrics. There was probably half a beat on the phone and he said, ‘yeah, yeah – sounds like a funny idea.’”

The funnyman also says his hit, Smells Like Nirvana, brought him back into the spotlight after a slow couple of years.

He says: “When I came back with Nirvana, that brought me right back into heavy rotation on MTV and back into the top 20 in the Billboard charts and it did feel like a real return to form.”