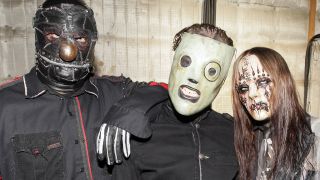 Former Slipknot drummer Joey Jordison says he felt the band were at breaking point when they recorded their fourth studio album All Hope Is Gone.

Jordison joins Corey Taylor and Shawn “Clown” Crahan in the new-look issue of Metal Hammer magazine to discuss the making of the landmark record as it celebrates its 10th anniversary.

In the exclusive interview, Taylor admits that at the time, the band were at their “most fractious” as “nobody was talking to each other, everybody was going behind everybody’s back trying to make the album theirs.”

And Jordison says the tensions within the camp resulted in the Iowa outfit recording the “heaviest” record they could.

The drummer says: “The tensions are what made that record great. Everyone was completely on fire with emotions and being in different places, and you could see the lines in the sand, you could feel the concrete breaking a little bit.

“You could feel the band cracking. There was so much going on during that time that I think that’s what made the record so brutal. Everyone had some sort of tension to get out just to make it the heaviest record that we could.”

However, Crahan sees the album sessions in a different light and says the differences within the camp were “our family’s way of growing”

He adds: “There are probably some cats in the band that despise that someone like myself was up recording, but if you know anything about me, I don’t give a fuck what you think. I do what I want, and that’s what needed to be done.

“From the outside, it’s going to look like war, because that’s how we make everything look. But on the inside, it was a nice temperature to keep the pot from overboiling.”

Slipknot are the cover stars of the latest issue of Metal Hammer, which is on sale now.