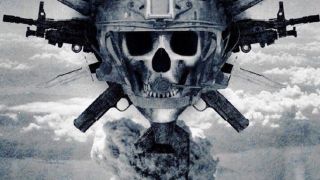 Following the departure of Ryan Thornton, the axeman stepped in on lead guitar to finish the recording on Waiting (For The End Of Man).

The group features former members from other Iowa metal bands, including Painface, PygWalk, and Mars on Fire.

Steele performed as part of the original Slipknot line-up from the band’s inception in 1995 until he left in 1996, allegedly due to his Christian beliefs.

The Des Moines local temporarily rejoined the band for a couple of years as a touring bassist in 2011 after Paul Gray died from an accidental overdose the previous year – choosing to play backstage out of respect for his late friend.

Murder Earth’s Waiting (For The End Of Man) can now be bought via iTunes.