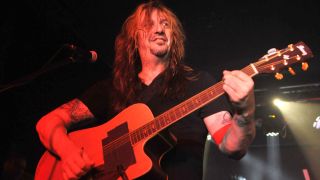 Skid Row's Dave 'Snake' Sabo says albums are a dying format because people don't have time to listen to them anymore.

The guitarist says musicians have to adapt to the modern world where most people work longer hours for less money. And for Skid Row, that adaptation means releasing shorter EPs instead of albums.

He tells Rock ‘N’ Load: “This year not one artist has had a million-selling record in the United States. Coldplay came the closest, apparently. The only thing that sold over a million records is the soundtrack to the movie Frozen. And so that’s just a clear indication that we are in a different time.

“And that’s okay — we don’t lament the past. You have to adapt and navigate through what’s thrown at you, and that’s what we’re doing. That’s the reason why we’re releasing EPs — you don’t wanna inundate people with too much music, because they just don’t have the time. No one has the ability anymore to sit down for an hour with their headphones on and experience a new record.

“And that sucks. But that’s life. People are working three times as hard for a third of the money these days. It’s just a different economic landscape and people just don’t have the luxury.”

Sabo also believes TV talent shows like The X Factor and American Idol fail to recognise the work of songwriters.

He adds: “Those shows have diluted what songwriting and music is about. On one level, it shows great songs being played, but I think what the audience gets out of it more is not that great songs are being sung, but the idea that a person can just go out and sing and become a pop star and not really realising that writing a great song is an art form.

“That’s not to say that being a great singer isn’t – it is. But there’s more to it, and it can’t be cookie cutter. And that’s what those shows have succeeded in diluting the power of writing great music, in a sense. I wish the songs they sang in those shows, that they showcased the songwriters as well, that they made mention of that, so people would realise there’s people behind these familiar songs they’re singing.”