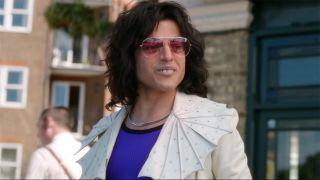 Rami Malek has spoken about some of the challenges he faced while playing Freddie Mercury in the Queen biopic Bohemian Rhapsody.

The actor was recently nominated for a Golden Globe for his celebrated performance – but in a new interview with The Wrap, Malek says it wasn’t an easy part to play, especially when it came to accurately portraying the iconic frontman.

Malek began getting into character by practicing with a set of fake teeth long before the cameras started to roll and and he says: “They started out being pretty difficult to deal with.

“We tried out all different sizes and when they first went in I felt very insecure, but immediately I compensated.

“Physically, I started to sit with more posture and elegance and I thought, ‘Oh, he is so elegant!’ You see him covering up his lips and his teeth all the time, and I could never quite get the hang of it. But as soon as those teeth went in, it was done. It was little things like that that were very informative for me.”

Malek also admits that there was much about Queen he didn’t know prior to accepting the role and had to catch up quickly.

He says: “I knew the songs, I knew what Freddie Mercury looked like, I knew he was a gay icon and is an icon to all of us, but I had no idea of the glam-rock period.

Malek adds: “I tried to pick everybody’s brain. I was basically going through the rock star phone book and seeing if anyone would pick up my call.”

The winners will be announced at the 76th Golden Globe Awards, which will take place at the Beverly Hilton, Beverly Hills, on January 6.