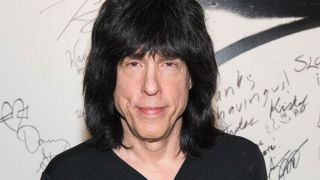 Marky Ramone has recalled his disappointment at meeting a drunk John Lennon in New York.

The iconic rocker met the Beatles star in a nightclub, but didn’t get the chance to speak to him about music as the alcohol had been flowing freely all night.

Ramone tells The Metal Voice: “I wish I could have met John Lennon under different circumstances, where I could have hung out with him and talked about music, but he was pretty inebriated.

Ramone tried to chat to Lennon, but only received a mumbled response. “Then I left,” he adds.

The drummer also spoke about his book, Punk Rock Blitzkrieg: My Life as a Ramone. He says: “It took five years. It’s my story. I was in the band 15 years, 1700 shows, in the Hall Of Fame and Grammy award winner.

“I was on the Simpsons. I was in other bands besides the Ramones, I was in one of the first bands in America that started heavy metal, then I started hanging out in the punk scene in New York city.

“Plus the making of Rock And Roll High School the movie and working with the legendary Phil Spector. Done nine studio albums with The Ramones. It’s the most comprehensive book.”