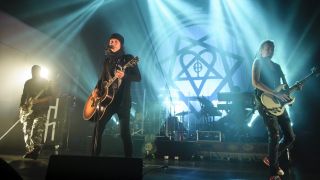 Fields Of The Nephilim have announced that Finnish rockers HIM will be very special guests for their 30th anniversary shows in December.

HIM singer Ville Valo, a lifelong fan of the English goth/rock band, says: “Crafting and crooning such demonically delightful ditties for three decades is no mean feat, and we’re extremely excited and fiercely flattered to be invited to join the festivities by sonically honouring the past, present and future of Fields Of The Nephilim.”

Offering the slot to the Finnish rockers was also a chance to return a favour, as Valo had previously asked Fields Of The Nephilim to play the Helldone Festival.

The Nephilim’s Carl McCoy said: “We played alongside HIM at their own festival some years ago at their personal request, so we are now able to return the compliment.”

The London gigs will take place on December 5 and 6 at the O2 Shepherd’s Bush Empire.