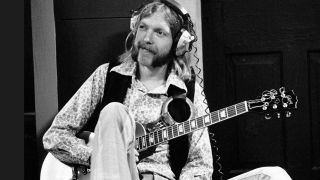 The 1957 Goldtop Gibson Les Paul Guitar that Duane Allman used on the classic 1971 Derek And The Dominos track Layla has sold at auction for $1 million.

The sale was carried out by Gotta Have Rock And Roll and carried an estimate of between $1.5m and $3m – but one bidder came straight in with a $1m offer which was enough to secure the guitar.

Along with its part in rock’n’roll history with Layla, Allman also used the guitar on the Allman Brothers Band's self-titled 1969 debut album and on 1970’s Idlewild South and was known simply as “The Studio Guitar.”

The instrument had been on display at the Allman Brothers Band Museum at the Big House in Georgia and had also been played by artists including ZZ Top’s Billy Gibbons, Metallica’s Kirk Hammett, Charlie Starr, Vince Gill and Derek Trucks.

Allman is reported to have changed Layla’s dynamic by speeding up the opening riff, with some claiming that Allman came up with it.

However, Bobby Whitlock who co-wrote much of the album Layla And Other Assorted Love Songs has disagreed with this, telling Classic Rock in the past that the riff had already been created.

Producer Tom Dowd added: “There’s an Eric Clapton rhythm part, three tracks of Eric playing harmony and the main riff, one of Duane playing that beautiful bottleneck, and one of Duane and Eric locked up, playing counter melodies.

“There had to be some kind of telepathy going on, because I’ve never seen spontaneous inspiration happen at that rate and level. One of them would play something and the other would react instantaneously.

"Not once did either of them have to say, ‘Could you play that again, please?’ It was like two hands in a glove.”