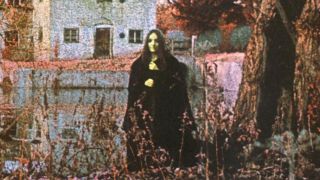 Widely regarded as the record that gave birth to heavy metal, the album has come under scrutiny over the years – not only the music, but for the mysterious woman in black who graced the front cover.

In a new in-depth interview marking the record’s 50th birthday, Rolling Stone caught up with the woman, now identified as Louisa Livingstone, and with the photographer Keith Macmillan to discuss the creation of the iconic cover.

Macmillan reveals he found Livingstone through a London model agency and adds: “She was a fantastic model. She was quite petite, very, very cooperative. I wanted someone petite because it just gave the landscape a bit more grandeur. It made everything else look big.”

Livingstone, who says she was 18 or 19 years old at the time, recalls: “I had to get up at about four o’clock in the morning, or something as ridiculously early as that. It was absolutely freezing.

“I remember Keith rushing around with dry ice, throwing that into the pond nearby, and that didn’t seem to be working very well, so he was using a smoke machine. But it was just one of those very cold English mornings.”

As for the location at at Mapledurham Watermill in Oxfordshire, Macmillan says: “Nowadays it’s very much more modernised, beautified, and touristed. Then, it was quite a run-down and quite a spooky place. The undergrowth was quite thick and quite tangled, and it just had a kind of eerie feel to it.”

The mysterious object clutched in Livingstone’s hands has always been the source of debate – and it’s no nearer being resolved as Macmillan insists it was a black cat, but Livingstone says:  “I think it might just be the way my hands are there. I’m sure I could remember if it was a cat.”

And, despite going down in rock and metal history, Livingstone admits she’s not exactly the world's biggest Black Sabbath fan.

She says: “Black Sabbath is just not my kind of music. I feel awful for saying it, because it’s probably not what people want to hear, but it isn’t particularly my kind of music. When I got the album, I gave it a listen and moved on.”

And while Black Sabbath aren’t quite her cup of tea, electronic music is, with Livingstone recording under the name of Indreba.

Here, Back Sabbath recall making the landmark album, which was recorded in a single day at Regent Sound Studios in London in 1969.