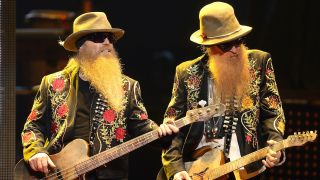 This article first appeared in The Blues #2 in August 2012.

“Our flat tyres on a muddy road. Thick and throbbing. The rhythm section from hell and holding on strong.”

That’s Billy Gibbons’ description of his two ZZ Top bandmates – bassist Dusty Hill and drummer Frank Beard – with whom he’s produced some of the most potent psychedelic-blues-rock-boogie to come out of the Lone Star State. It may be Gibbons’ white-hot licks, a meld of Hendrix, Peter Green and Lightnin’ Hopkins, accompanied by that earth-shaking growl, that hits you first when you hear a ZZ Top tune. But it’s the locked-down groove of messrs ‘Rube’ Beard and The Dust that makes you wanna move.

Now, 40-plus years since they formed, ZZ Top are still prime purveyors of ‘boogeee’ as demonstrated on their internet-release EP, Texicali. “All things ‘blue’ continue to resonate,” announced Gibbons, as the band tell us how they met the blues.

When did you first get into blues music?

Billy Gibbons: Must’ve been when I was around five years old, listening to the radio with our maid, Stella Matthews – Big Stella – and later with her daughter, Little Stella. They just couldn’t do without some blues!

Dusty Hill: When I was growing up, we had blues records in the house. My mother sang, and she loved Bessie Smith. I loved Elvis Presley and Jimmy Reed. I thought it was like that in every house. The first time I realised I might be different was when I took a couple of blues records to a friend’s house and his parents were pissed [as in angry] and asked me to leave.

Frank Beard: When I was about 15, I started to play and then I discovered all the blues joints in Dallas where you could hear a lot of great players, such as Freddie King.

What were the first blues records you bought?

BG: Honey Don’t Let Me Go by Jimmy Reed and One Way Out by Sonny Boy Williamson.

FB: It was probably one of Freddie King’s records.

What was the first blues song you learned to play?

BG: One of Jimmy Reed’s numbers and Ray Charles doin’ What’d I Say.

DH: It was probably Hush-Hush or Big Boss Man by Jimmy Reed, because they were so simple to play.

Did you go to many blues concerts when you were young? If so, who did you see?

BG: Well, it wasn’t a concert; it was a blues joint called The Mocombo in Fourth Ward Houston. Little Stella would sneak us out when Big Stella went to sleep.

DH: I went when I could, because it was a different era and it was difficult. I’d go see Fats Domino, who was more accepted.

Were the British musicians much of an influence on you? Who’s your favourite Brit bluesman?

BG: Keith and both Micks, Clapton, Peter Green and Mick Abrahams, to name the obvious few. Seems the British players were getting it right during the 60s, when nobody elsewhere was even thinking about it.

DH: Absolutely! The American blues was either taken for granted, recognised in an underground way or ignored. The British bands listened to the music, dissected it and played it with their own flavour. I remember hearing Cream’s Sitting on Top of the World. It’s an old country blues song but they played it as if they wrote it and generations of musicians learned from that, which is the way it’s supposed to be.

FB: I got turned on to a lot of great blues through Cream, when I discovered they didn’t write Crossroads.

Which of the three Kings rules: Albert, BB or Freddie King?

BG: I’ll have all three!

FB: They’re all excellent but I loved the way BB answered his singing with his guitar playing, that was awesome.

Which blues artists have you played with?

BG: BB King taught me most everything – how to string and how to sing. BB is a good friend with a lot of patience and a great sense of humour. The best.

DH: I played with Freddie King when I was 15. Me and my brother [Rocky Hill] had a band and when Freddie rolled into town he used us a lot. I don’t know why because I wasn’t that good. You learned real quick, because he didn’t take any shit! Billy and me inducted him into the Hall Of Fame, that was a huge honour. I also played with Jimmy Reed and carried his bottle.

FB: I played with Freddie, Lightnin’ Hopkins, Chuck Berry and Bo Diddley. Dusty and I, and sometimes Billy, got an opportunity to be their back-up band, and they expected you to know their music, there was no rehearsal. It was quite intimidating. Especially Chuck Berry. If you hit a bum note he’d turn round, glare and say, ‘Don’t do that!’

DH: I loved Howlin’ Wolf; how he could take a lyric and just make it come alive, almost in a scary way.

BG: Wayne Bennett’s solo on the Bobby Bland recording of Stormy Monday Blues. You can only hear it on the LP version, Here’s The Man on Duke, so start the search for some vintage vinyl. It’s the definitive blues guitar solo.