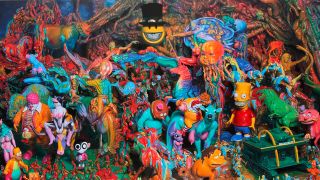 Myles: The title track is about seizing the day and living for the moment. Above all, it’s about living your life with no regrets. Doing what you want – doing whatever makes you happy. Carpe diem./o:p

Slash: I was sitting on the couch in front of the TV waiting for the car to come and pick me up to take me to the airport as we were going to France. I had my guitar and was playing this riff, and it stuck in my head for however long I was in Europe.

Myles: This is about trying to keep up with the consummate party girl – basically, someone who’s living on 10 all the time. We’ve all known those people who have that kind of dynamic. That song makes me smile.

Slash: It’s another riff from the road. I listened to it again when I came home. It evolved in the studio and went through so many changes when we recorded it.

Myles: This song could pertain to a lot of different things, but it’s really about someone who’s in the throes of addiction and coming to terms with wanting to fight for a better existence. It’s a subject matter I’ve touched on before, and I felt like the music in this song called for that again.

Slash: Honestly that’s one of my favourite songs on the record. It’s different to what I usually write. It’s all eight notes on the downstring but it’s really fun. There were parts of the song we jammed in soundchecks. It was one of those riffs that I knew was on my computer and was great. But when we got home, I had to spend some time digging it out.

Myles: This is a true story about a hate crime in the Pacific Northwest. It happened quite a while ago, when the perpetrator was in his late teens. He was just a young man and he took someone’s life. It made me think. I wondered if, as the years have gone by, this person had any regrets. They were so young when the crime happened, and maybe they had grown as a person and regretted the fact they did something so heinous to somebody else, and ultimately they will pay for that for the rest of their life in prison.

Slash: One of the album’s slower songs, this was written in the dressing room for Conan [the US talk show presented by Conan O’Brien]. That day Myles and I were doing Nothing Left To Fear for the movie I produced [2013’s Nothing Left To Fear]. We were sitting around and I played it for Myles and he liked it.

Myles: This is a coming-of-age story. You reach a point as a young person where you have to fly the nest. The song has a character conveying to his mother that it’s time to go. It definitely stirred up some memories. I flew the nest a little earlier than most because of something that happened with my parents. My stepdad got a job that meant he had to leave the city, so I chose to stay and finish my last year of school without my stepdad and my mom around. That was tough. It definitely forced me to grow up faster./o:p

Slash: When we did Apocalyptic Love, there was a song called You’re A Lie. We wrote that when we were rehearsing before recording. Then, all of a sudden, it wasn’t flowing. So on the spur of the moment we tore out the riff, wrote a new chorus and that became You’re A Lie. After that, we were racking our brains what to do with the riff. I kept dicking around with it and writing new parts. It was the most laboured song on the record because of its origins, but we found a good chorus and it became the song it is now.

Myles: I loved the TV show Mad Men, and that was the inspiration for this. The main character in Mad Men, Don Draper, leads this kind of double life. The song illustrates how complex life can become when you’re trying to lie to yourself and lie to your family./o:p

Slash: Another couch song, in that I came up with the riff lying around at home on my couch!

Myles: Beauty is a very powerful drug, and this is about someone who’s blind to the deceptive ways of another – basically because of their beauty. Sometimes, guys in particular can’t see the forest for the trees. Beauty really is a powerful, powerful drug.

Slash: This the oldest riff on the record. It’s a tricky riff that dates back to Apocalyptic Love, but I really hadn’t sussed it out then. Rick Nielsen from Cheap Trick was rehearsing next door to us and he heard it so many times he learnt the riff! We hammered it on the road and when we came back from the tour, we finally got it together.

Myles: It’s about a personality type: a person whose actions will usually bring about consequences that are not necessarily the best. The song isn’t about anybody in particular – it’s about a type. A type we all know.

BENEATH THE SAVAGE SUN

Slash: This is a subject dear to my heart – elephant poaching. Being an animal activist, I’m glad to speak out against that. So the music was a dressing-room riff that turned into this epic song. The middle section was written separately, so I had to dig into my computer and it took me an hour to find it.

Myles: The genesis of this lyrical idea came about last year when we were in South Africa touring with the Kings Of Chaos. We befriended this park ranger there named JP, and he educated my wife and I about what was going on with poaching, with rhinos, with elephants. So I wrote this story about an elephant whose mate is killed by a poacher, and it vows to take revenge on the poacher. The fight against this kind of poaching is something that we’ve all become active in – my wife and I, and Slash, we’re all pretty passionate about it.

Slash: This is an old soundcheck riff we kept playing. It’s a real rock’n’roll lick. The rest of the guys loved it.

Myles: It’s inspired by an article I read about the entertainment industry, and the movie industry in particular. A lot of times when actresses reach their later years, they’re not used any more in films. They kind of become irrelevant because their beauty fades.

Slash: It’s one of the ballads, if there are any real ballads on the album. It’s a love-interest thing. It’s something I jammed in soundcheck and then spent a lot of time working on at home on the acoustic guitar.

Myles: Battleground is essentially the dynamic that a lot of people find in relationships. There’s a key line in this song: ‘In the bed where we’re used to making love, now we’re making war instead.’ A lot of times people stop speaking or doing all the things they used to do. It’s something that I’ve gone through as an adult plenty of times. We all have. But it’s certainl not a commentary for where I’m at personally. In fact, we just celebrated our 11-year anniversary, so… I’m using artistic licence here!

Slash: This is a riff I wrote years ago but was never able to develop into something that would work for a rock’n’roll band. It was too funky! I played it to Myles before my first solo record. He liked it, and when we were doing Apocalyptic Love, it came up but it hadn’t come together. This time it came up again and became an entirely different song. In fact, it’s not even the original riff.

Myles: This song is very tongue-in-cheek and very funny. The idea is that this guy has… I don’t want to say fallen in love, but he’s pretty infatuated with this chat-room girl. I’m sure that’s a pretty common story: these poor blokes that are trying to get their kicks, spending their money on someone far, far away on another computer screen./o:p

IRIS OF THE STORM

Slash: Another road riff. I played this to the guys in its most simplistic form in a soundcheck. But I needed to bring it home after the tour to work on it.

Myles: The title is based on the idea that in the eye of the storm it’s actually calm. I’ve always thought the image of that is fascinating. I used ‘Iris’ instead of ‘Eye’ because it sang better. The lyric is about trying to navigate through a sea of naysayers. Someone is trying to go out and do what they believe is right, they believe in themselves, and yet the world around them is telling them they can’t do it.

Slash: This one is influenced by any number of Irish style bands, especially [the late guitarist] Rory Gallagher. Rory was such a great guitarist and so underrated in the scheme of things. Avalon has that bouncy, Irish, knees-up dance thing going on.

Myles: It’s the story of a soldier who comes back from battle. He’s been gone for so long that his lover has forgotten about him. So his new battle now is to try to win her back, to win her heart again.

Slash: This is something the guys in the band are familiar with from soundchecks. It was a melody I was playing a lot, but at first I couldn’t work out how to turn it into a song. It’s Myles’s political statement.

Myles: The original title for this song was Conscientious Objector, but we changed the title because it was a little too much of a tongue-twister. The song is about a soldier who starts to question what he’s fighting for. He doesn’t believe that the war is right any more. Todd does a really great little intro to the song – he picked up an acoustic guitar and started strumming away, and it was recorded. We all loved it, so we ended up putting it on the beginning of the song.

Slash: This is the instrumental, and it’s named after a hotel in LA. I used to drive by it every day at one time, and I always thought it was a cool name and that something could come out of the place.

Myles: The instrumental. Slash came up with that title. I think it’s named after a hotel in Hollywood, if I’m not mistaken. A reputable establishment, I’m sure.

Slash: The origins of this song came from me wondering when I wrote for movies if I used a different part of my creative brain. That’s an interesting phenomenon that’s only come up in recent years.

Myles: This is the heaviest song on the record in terms of subject matter. It’s about the cases that have come out recently about all the priests who have basically gotten busted for what they did to young boys. A lot of these crimes happened years and years ago, but now that these boys have grown up, the story comes out. Writing a song like this is tricky. When I first heard the music, I knew that it was a real epic piece. With a track like that, it had to be something pretty deep and dark, and that’s where it took us./o:p