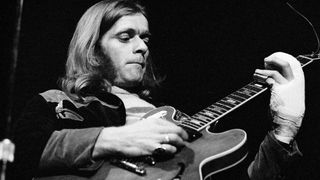 From humble showband beginnings, Northern Ireland guitar virtuoso Henry McCullough boasted a talent so undeniable that Jimi Hendrix produced him and, after he supplied spine-tingling dynamism to one of the Woodstock Festivals’ most explosive performances, Paul McCartney snapped him up for Wings.

Within weeks of their arrival in London from Belfast in 1967, Hendrix’s manager Chas Chandler signed McCullough’s Eire Apparent, but soon after Hendrix produced their Sunrise album, the band split. Henry briefly returned to Ireland, and folk band Sweeney’s Men, before joining Joe Cocker’s Grease Band. In 1971, he embarked upon a short but memorable stint with Wings and in 1973 made the biggest selling recording of his entire career when he added the words “I don’t know, I was really drunk at the time” to Money from Pink Floyd’s Dark Side Of The Moon.

Latterly working with (among others) Spooky Tooth, The Frankie Miller Band, Marianne Faithfull, Roy Harper and Dr Feelgood. Henry McCullough continued to write, record and perform solo until suffering a debilitating heart attack in 2012. He died on June 14, 2016 aged 72.

One of the bonuses of having Chas Chandler as your manager is not only do you get to tour with Jimi Hendrix, nor just have him produce your record, you also have him playing guitar on it. Which is nice. Rock ’N’ Roll Band is a strident Henry-propelled and Jimi-steered floor-filler that barrels on down the highway like John Fogerty en route to the liquor store.

For many the defining highlight of Woodstock, Joe Cocker’s brutal, visceral assault on Ringo’s finest Sgt Pepper moment owes much of its dynamism to Henry’s blistering, pulse-quickening crescendoes. Serving as an electrifying climax to an entire era, this was the performance that made Cocker’s name and cemented McCullough’s reputation.

The Grease Band – Let It Be Gone

A whiskey-soaked, tight but loose, deliciously Appalachian knockabout Faces vibe predominates on this irresistible McCullough original. The first, largely ignored, single to be taken from the Cocker-unencumbered Grease Band’s eponymous debut album of 1971. Imagine Rod Stewart with his Celt cranked up to 11 and you’re almost there.

This is the one. Though not exactly the crowning achievement of McCartney’s solo career, My Love features a soaring McCullough solo of such subtle, sensitive power that it effortlessly transcends the Beatles-lite song that inspired it. Consequently, rather than just another silly love song, My Love is transformed into Sir Macca of Fab’s very own Goodbye To Love.

The Frankie Miller Band – Ain’t Got No Money

Let’s not mess about here, this is a stone cold classic. If you like Free, if you like the Faces and you haven’t already got this, you really need to go out, right now, break into your local record store and be utterly disgusted that they probably haven’t got it in stock. The rock press allowed punk to bury Frankie Miller’s career. For shame, for with Henry at his side, as here, he’s invincible.