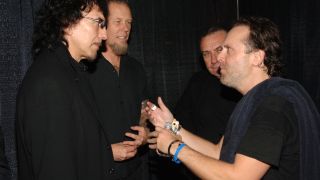 Fittingly, they arrived dressed in black, the elder statesman and the young noble. Tony Iommi’s and James Hetfield’s hueless sartorial splendour was, more or less, expected. What was more than a little surprising, however, was the fact that this dual interview marked the first time the two overlords of overdrive actually sat in the same room.

Tony, you started off playing traditional blues, how did you make the jump to composing the heavy, riff-oriented music that characterised Sabbath?

IOMMI: Well, to be honest, we just became so fed up with people talking while we were playing that we said, “Screw it, let’s turn it up so they won’t be able to chatter” [laughs]. The band just kept getting louder and louder.

Did your new sound provoke an immediate reaction from the audience?

IOMMI: Yeah. After we wrote Wicked World and Black Sabbath, we thought, “Well, we’re going to have to try them out.” When we did, everybody in the club just froze. We had all these blues people saying, “What’s that?” The reactions were very strong, both pro and con. But I think most people enjoyed what we were doing because they’d never heard anything like it.

James, how did Metallica come to pioneer thrash metal?

HETFIELD: Like Tony, we also played cover tunes when we first started. We were really influenced by the New Wave Of British Heavy Metal. Most people thought we were performing originals – they had never heard any of the shit before – which was good for us. We took all the credit!

Eventually we started playing everything faster and louder because, just like with Sabbath, the crowd wasn’t paying any attention to us and that pissed us off.

IOMMI: Yeah, I used to hate the sight of Ozzy. I couldn’t stand him, and I used to beat him up whenever I saw him. It’s amazing that he eventually became part of Sabbath.

HETFIELD: I heard one story that Bill Ward showed up to go on tour one time with his only suitcase filled with beer.

IOMMI: Well, Bill never used to take many clothes at all. And when he did, he’d have two suitcases: one with dirty clothes and one with dirtier clothes.

IOMMI: Oh yeah, he always had his red tights.

HETFIELD: What do you think of his tights?

IOMMI: Bill was a character! He was our outlet, the one everybody picked on. I used to do terrible things to him. I set him on fire once – honest to God. We were recording Heaven & Hell, and I asked, “Can I set you on fire, Bill?” And he said, “Well, not now, not now.” So I said, “Okay,” and forgot all about it.

An hour later Bill said, “Well, I’m going home now. Do you still want to burn me, or what?” So I got this bottle of petrol, tipped it on Bill, set fire to him and – voomph! I couldn’t believe it! He went up like a Christmas tree. Well, he knew I was going to burn him, but he didn’t know to what extent. He screamed and started rolling around on the floor. His clothes started burning and his socks melted – the nylon socks stuck to his leg. I wasn’t able to help him because I couldn’t stop laughing.

It was actually pretty serious; he had to go to the hospital. I felt really bad. He had third-degree burns on his arms and legs and everywhere. The next day his mother phoned me up and said, “You barmy bastard. It’s about time you grew up. Our Bill is going to have to have his leg off.” She exaggerated a bit. Things like that were a regular occurrence with Bill.

Tony, although many people credit Edward Van Halen, you were actually one of the first guitarists to detune your guitar, which helped create your signature dark sound.

IOMMI: We’d try anything to make our sound heavier.

HETFIELD: Wasn’t it hard to stay in tune?

IOMMI: I had to use light strings, too. I had a work-related accident in the early 60s that cut off the tips of my fingers. So I can’t bend heavier strings. I can’t even feel the strings. [Displays his amputated fingers] See, this one’s cut off, and that one’s gone off that way.

IOMMI: Suddenly, I had to develop a new way of playing. Ironically, I had the accident on the same day that I was supposed to quit my factory job to tour Germany with this group. So when I started playing again, I had to devise a new way. I used to play a lot with my forefinger and pinkie because the two middle fingers were bandaged up. I learned to use and bend with my little finger a lot.

HETFIELD: Why do you need the thimbles? Can’t you just use your shortened fingers?

IOMMI: There’s only one layer of skin that covers the bone. Sometimes when I’m playing with the thimbles they come off and…

Why do you think Black Sabbath became a punching bag for the critics? Millions of people loved you.

IOMMI: Millions of people hated us as well. I think we were the band to pick on from day one, because we went against all the things we were supposed to be. Everybody picked on us because we were ‘satanic’. The church went against us in a big way.

HETFIELD: Did you ever have to cancel any gigs because of protesters?

IOMMI: Well, the church stopped a few gigs from happening. One case was quite funny. A church ran a thing in the papers for weeks before a scheduled performance that said, ‘If you let these lads into town, you’re committing a sin.’ Anyway, they managed to stop us from playing. And the next day that church, for some reason, burned down [laughs]. And guess who got the blame? The uproar was ridiculous!

A worse incident was in California. When we arrived at the gig, there was a red cross painted on our dressing room door, so we figured, “This must be the room!” [laughs] When we were playing, my amp started crackling. I got so angry that I walked off the stage. As I did so, some guy with a dagger tried to stab me. As it turned out, the cross on the door was written in his blood – he had cut up his hands. As they dragged him away he yelled at us, “Satanists!”

Tony, do you ever listen to your old stuff?

IOMMI: Sure. Occasionally we’ll get drunk and think, ‘What did we used to sound like?’ And we’ll put an old album on.

HETFIELD: I like listening to our old stuff. The other guys will say things like, “Oh, I can’t listen to this song because of such and such note I played.” Especially Kirk [Hammett]. I don’t do that. I’ve completely forgotten about things. Either I was drunk or I didn’t give a shit.